Everything You Need to Know about Casting Age Ranges

Casting the right age range for your role can be tricky. Sometimes you find an actor who looks like they could pull off certain ages, and they might even say so in their profiles, but it isn’t necessarily true. Other times you might inadvertently choose an actor who’s actually outgrown the age that you need them to play by just a hair – and it happens to show in person. You could even go the other way and accidentally cast an actor that’s too young for what you need them to do from a character perspective or even for a legal reason. This is why you need to understand how to properly cast age ranges for your roles.

When you are creating a role in Casting Networks, you must be specific about the points above, but also because it’s essential to moving your project forward.

Where do I enter age ranges for my role?

When creating your role, make sure that you select the proper age ranges for the role’s specifications. You can do that after you have finished creating your project in your “Role Details” page. Age ranges may be entered in the “Demographic Features” section in the “Role Age Range (years)” box. You also can note the age in months for toddlers. 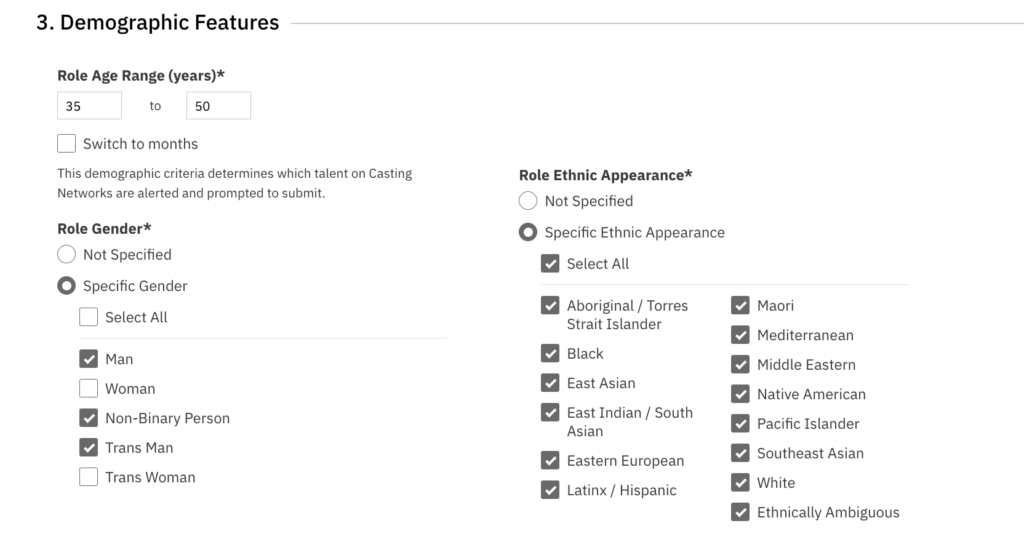 How specific do I need to be about age ranges for my projects?

When creating a role for your project, you must be specific about the role’s age range, which may not match the age of the performers who will eventually play them. An actor’s playable age range may be older or younger than their true age.

For example, if your role is for a grandparent, cast someone who is in their early 50s at the youngest is ideal. However, when your role is for a teenager, you’ll probably need to cast actors between 18-23 who can play younger, but you’ll want to avoid casting performers over the age of 25, even if they’re very youthful-looking.

Believe it or not, casting a close match between a performer’s and characters age will go a long way when hair and makeup are being applied. But when the age is miscast, this usually will have the opposite effect as no amount of hair or makeup will create a realistic look. Exceptions may exist (we’re looking at you, Nicola Coughlan!), but they are not the norm.

What age ranges should I use for casting roles of different ages?

When casting teen roles, you’ll generally want to cast actors up to five years older than the age of the character. Seniors and minors/children can sometimes have a little more leeway in either direction. That’s not a hard and fast rule – the Cast of Glee had actors in their 30s portraying high school kids – but it’s a safe bet.

In general, you should lean towards casting older because your actors will have more life experience to bring to their roles. In some cases, you may need to go to actors of a certain age from a legal standpoint. For example, teenage characters consuming alcohol in a production must be played by actors who are at least 25 years old, and roles that require sexual situations, violence or language require the performer is 18+ at a minimum. Knowing and sticking to the letter of the law is especially important when it comes to casting minors and children.

What do I need to know when casting minors and children?

If you are casting minors and/or child actors for your role, make sure you know and understand the child entertainment labor laws in your region. If casting for minors in the United States, we recommend reviewing the information at childreninfilm.com to ensure you understand and abide by your individual state’s child labor laws.

Other things to note when working with minors:

When it comes to casting the perfect actors for your project, you should make sure that you’ve cast an actor who appears to match the age of the role you’ve created. As an easy rule of thumb, if you are casting between 1-5 years older than the character’s age, you should be in the ballpark every time. There are exceptions to the rule, but use them sparingly to avoid your project getting stuck in limbo. And make sure you know your area’s child labor laws when it comes to casting minors.

Time to put what you’ve learned about casting age ranges to work. Login or sign up to Casting Networks to start casting the right actors for the right part now!