My Casting Story: Danielle Deadwyler on ‘Till’

It started as a typical film audition, but the result is anything but for Danielle Deadwyler.

The actress’ turn as a mother who seeks justice for the brutal lynching of her teenage son, Emmett, in the historical and biographical movie Till, has been hailed by critics and audiences. Directed by Chinonye Chukwu, Till is told from the perspective of Deadwyler’s Mamie Mobley-Till, who goes from a grieving mother to the activist and educator the world has known since.

While talk of an Oscar nomination for the actress is already swirling, Deadwyler reflected to Casting Networks on her early beginnings with the film, which began as a regular audition.

“It was a traditional process for me,” Deadwyler revealed. “I sent in a self-tape. They came back and said they wanted to do a director session. I did the director session, which was the scene where Mamie views the body for the first time.”

Ahead of that session, Chukwu sent the actress a two-page excerpt from Till-Mobley’s book, The Face of Emmett Till. Those pages detailed her experiences seeing Emmett’s slain body for the first time. Deadwyler used it as reference during her audition scene in that director session.

“I was able to think about that (excerpt), and then process through that scene with Chinonye multiple times,” Deadwyler told Casting Networks.

Then, she continued, “I had a meeting, had another meeting, had a chemistry read with Jalyn (Hall, the young actor who played Emmett)…it was the full gamut of the experience of processing through this film. Even getting it.”

Deadwyler’s own journey to that point was also something to process and reflect on. Five years ago, she was booking roles like “Brunette Agent” on the TV series MacGyver, and “Animal Shelter Worker” in the Chris Evans Apple+ streaming movie, Gifted. At the same time, she was also starring in the OWN primetime soap opera The Haves and the Have Nots. It’s a working life that many actors relate to – playing leads in one area while playing nameless characters in another.

Lead roles in indie films like James and Emma and The Devil to Pay followed, as did a supporting role in HBO’s Watchmen. By the time a new decade rolled around, Deadwyler was appearing in such high-profile ensembles as Netflix’s The Harder They Fall, playing fan-favorite Cuffee, and HBO’s limited series Station Eleven as a graphic novelist and ex-girlfriend of a self-centered movie star. 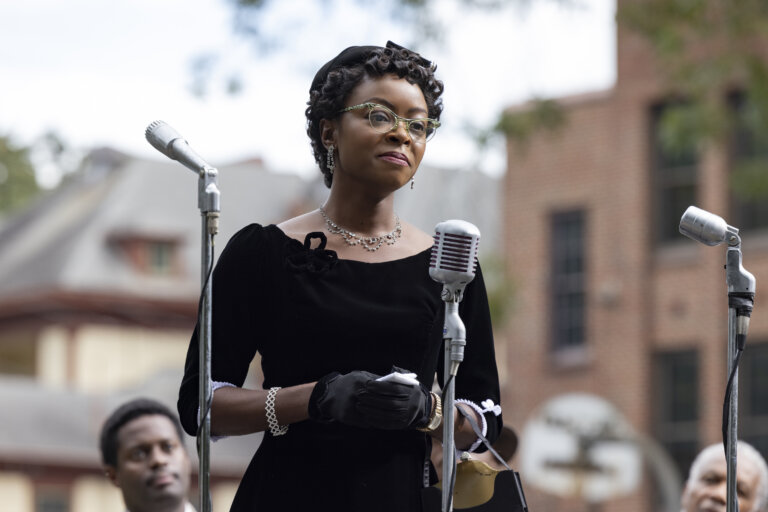 Now, the mantle of movie star is hers to claim. Yet Deadwyler is more interested in continuing to pay respect to the woman she portrayed – a mother who received no justice for the murder of her son, yet spent the rest of her life fighting for others like him.

“There’s a silent language when you’re doing this kind of work on set,” observed Deadwyler. “It’s a spiritual language … there’s an inherent responsibility and respect to this work in general.”

She also credits the film’s costume designer Marci Rodgers for the dresses and the heels she wore as Mamie. That wardrobe helped her find that “rigor and discipline in the beauty that women of that era performed all day long.” Production designer Curt Beech’s work was also significant for Deadwyler.

“It (was) emotional and beautiful to be in the room that was Emmett’s room and to move around 1955 Chicago,” Deadwyler observed. “This makes you understand the era and how people moved and engaged.”

Due to the harrowing subject matter, Deadwyler was grateful that Chukwu wanted every actor and crew member on set to be taken care of emotionally. That meant reducing the number of takes of certain traumatic scenes, so the cast and crew did not have to relive them repeatedly, or that young Jalyn had time between takes with his real-life mother to process any difficult feelings.

“The producers made sure that therapy was available to everybody on set,” she said. “In dealing with black trauma and those difficult story subject matters, we have to care for the wellness – the total wellness – of everyone who’s a part of the production. Those things were pivotal for me and for the full community of the production.”

For Deadwyler, embodying Mobley-Till and what she stood for was not something that stopped when production wrapped. The late activist/mother’s impact and work continue to live on.

Till is currently in theaters.