In case you missed it, Reggie Rock Bythewood’s hit Apple TV+ series inspired by NBA star Kevin Durant’s experiences as a child will be returning for a second season, which is currently filming. Sean Anthony Baker — known for his performances in series that range from CBS’ FBI to USA’s Queen of the South to the CW’s All American — is one of the Swagger cast members coming back for the show’s sophomore season. The actor took time out to virtually sit down with Casting Networks and share the casting story that led to his breakthrough career moment of landing a recurring guest star role on the series. Plus, keep reading to find out how Baker wound up in every single episode of Swagger’s inaugural season.

It’s great to Zoom-meet you, Sean. Before we dive into your Swagger casting story, I'd love to hear how you'd sum up your character of Coach Naim Rahaim.

He’s a loving husband, father, and an overall family man. Coach Naim is Muslim and is strongly rooted in both his religious beliefs and in his beliefs regarding community service. He’s a mentor and a role model. Naim is the assistant coach and best friend to the head coach, Ike “Icon” Edwards, played by O’Shea Jackson Jr. He’s a team player who believes in everyone working together to achieve a common goal.

He sounds like a great coach to me! And what can you tell us about the process of booking the role

Coach Naim was actually my second audition for Swagger. I had initially read for the role of Brett, who’s the father of another kid on the team named Royale. I auditioned for that character first and didn’t hear anything back until I got word that production liked me and wanted me to read for another role. That one was Naim, and I was dedicated to giving my best interpretation of who I felt the character was. I already had an understanding of Islamic beliefs from my Muslim friends, as well as an awareness of how they present themselves. Going into the audition, I wanted to make sure I was grounded in both Naim’s faith and in the importance he places on being present in his son’s life. By the way, I’m not a father. I’m a godfather to like 10 children and will be Uncle Sean forever! [Laughs] That has given me the opportunity to help raise some amazing kids, though, which I was able to draw from for the character. Plus, my father and my grandfather were heavy influences on me when I was coming up as a young man. So, I took all these little nuggets from my own life and made a choice. I decided that Coach Naim is this present and aware guy who’s deeply into his faith and loves people. Naim values his community and helping the kids on the team be the best they can be and get to the next level. That’s especially true when it comes to his son Musa, who is played by the wonderful talent that is Caleel Harris. 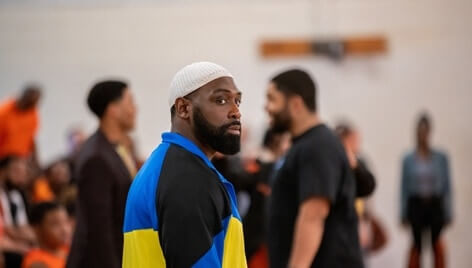 Sean Anthony Baker on the set of ‘Swagger.’ Courtesy of Apple.

It’s fascinating to hear how you pulled from your own life experience to connect with the character and prep for the audition.

Thank you. I just feel like we’re given the task as artists to tell the truth within the story. Of course, the filmmakers are the ones creating and writing the story. But, it’s our job as actors to make sure we’re conveying to the best of our knowledge the authenticity of who the person is. Because, the character is a person. Someone out there can look at the work we’ve done and see themselves in the role we’re playing. They get to say, “I can relate to that — I am that person.” And that starts with the audition process. So, as best I can, I want to bring authenticity from my own life to each role. That way, how can you lose as an actor? I mean, you either fit the part or you don’t.

Thank you for sharing that important aspect of what actors do. And can you tell us a bit about your experience filming the series?

The Swagger filming experience was unprecedented. We were met with some seemingly insurmountable obstacles while filming season one. After we shot a pilot, we had to go through changes with part of the cast. Then once that got situated, Covid hit. So, I’m not using the word “unprecedented” lightly — no one had previous experience in how to handle that. It felt like everyone was trying to walk forward, but you weren’t sure if the next move would mean stepping on a landmine or not. From production to the cast to the crew, everybody was affected by Covid. So, we all had to work together to get to our end goal of finishing the first season, which took two years.

Yeah, that’s not the norm. Hats off to our leader, our mentor, and the father of this show. Reggie Rock Bythewood has been championing us since day one and has fought his way through all the upsets to figure out how we can finagle our way through them. I’m grateful we were able to meet those challenges and overcome them. I think that was in part because everybody believed in the project and what the series is about at its heart. Yes, you see a lot of good, authentic basketball in Swagger, but the story is about so much more. It’s not a direct biography of Kevin Durant’s life, but it does reflect the trajectory of his story. It’s about those trials and tribulations he faced as he went through the AAU [Amateur Athletic Union] before he got to the NBA. And on a deeper level, the show speaks to how we get through all the twists and turns of life at each stage, whether it be as a child, as a young adult, or as an adult. It was Reggie’s idea to refer to each chapter in the series as a “maze” rather than an “episode” because Swagger reflects that aspect of this thing we call life. And going through all the trials and tribulations of filming season one together forged a strong family unit that has carried us back to season two. 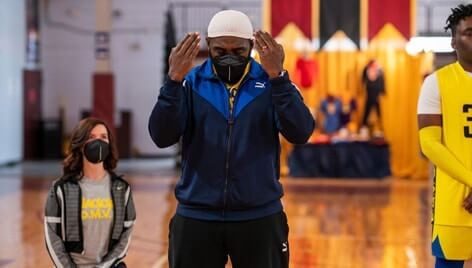 Sean Anthony Baker on the set of ‘Swagger.’ Courtesy of Apple.

It sounds like an example of life imitating art! And before we wrap, can you share something you learned from working on Swagger?

One of my biggest takeaways from the show so far is the gentle reminder it provided to always show up and do your best. The reason I say that is because my role was a recurring guest star, which oftentimes means you’ll be in and out of different episodes. So, I wasn’t sure what to expect for the first season, as far as how many mazes I’d be in, but I knew I wanted to give my all. I think the initial plan for Coach Naim was that he’d kind of just pop in here and there with some of the other supporting characters. I ended up being in every single maze of season one, though, and I truly believe in my heart that that was a result of Reggie and the other filmmakers seeing me put in the work and then deciding that we needed more of the character in the series. You know, you always want to give respect to what you’re doing and bring your passion to it. One of my mantras is: do it with passion or don’t do it at all. It doesn’t matter what the role is — give each opportunity your best. That’s been the theme of my career so far, and with season two of Swagger, you’ll get to see me doing it some more.

Those interested in keeping up with the career journey of the Swagger actor can find Baker on Instagram, where he regularly shares posts about his work.
—
This interview has been edited and condensed.