Former registered nurse Charlie Cullen is considered one of the most prolific serial killers in American history, implicated in as many as 400 deaths – all patients at the nine different hospitals he worked at over his career in the late 90s and early aughts. His story is now a film adaptation titled The Good Nurse starring Eddie Redmayne as Charlie. Jessica Chastain co-stars as his closest, unsuspecting colleague, Amy, who eventually gets Charlie to confess to his crimes.

Finding that balance of portraying a deadly killer while giving the appearance of being a trustworthy friend was a fine line to play, according to the film’s director, Tobias Lindholm. The filmmaker noticed that true crime genre films often enter the darkness to be fascinated by the horrors that occur there. With The Good Nurse, Lindholm wanted to enter that darkness with a hopeful reason. That’s why centering the film around its hero – Amy – rather than the villain was hugely appealing to him.

“This was the story about a lonely, struggling mom, raising two children, not being given the medical help she needed, and she was still able to stand up against a whole system and the most prolific serial killer in American history,” said Lindholm. “She was able to change events because she believed in goodness, and she believed in humanity. She was able to remind (Charlie) of his own humanity and get him to confess.”

The director also stayed away from true clime cliches and tropes by not adding little cracks to Charlie’s character to remind viewers he’s the bad guy. Instead, Lindholm wanted to convey that, first and foremost, Charlie was a friend who Amy needed, relied upon, and whom her children adored.

“I think that was the hardest part, to maintain true to the idea that this was Amy’s friend, and then wait and wait and wait until we finally allowed the beast of the murderer to come out,” he said.

For his part, Redmayne said the source material – the 2014 book The Good Nurse: A True Story of Medicine, Madness and Murder – was very helpful to him in putting together his character.

“Our film is the last third (of the book) – the moment when Charlie came into Amy’s life,” said Redmayne. “But the other two-thirds were an actor’s dream in the sense that there was so much biographical and incredibly descriptive information of his life and his trauma. That’s where I started all that research.”

Redmayne worked with dialect coach Michael Buster and movement director Alexandra Reynolds – the latter whom he worked with on The Theory of Everything – looking at all the footage they could find of Cullen to find his physicality.

“It was really interesting because when you see Charlie, there’s a stillness to him, but if you really examine him, often he’s self-soothing,” Redmayne explained. “So, the cardigans, the cashmere textures in the costumes, were really important. (They) were also a place where you could find gentle, soothing qualities, which I saw as referencing his abuse or trauma when he was younger.” 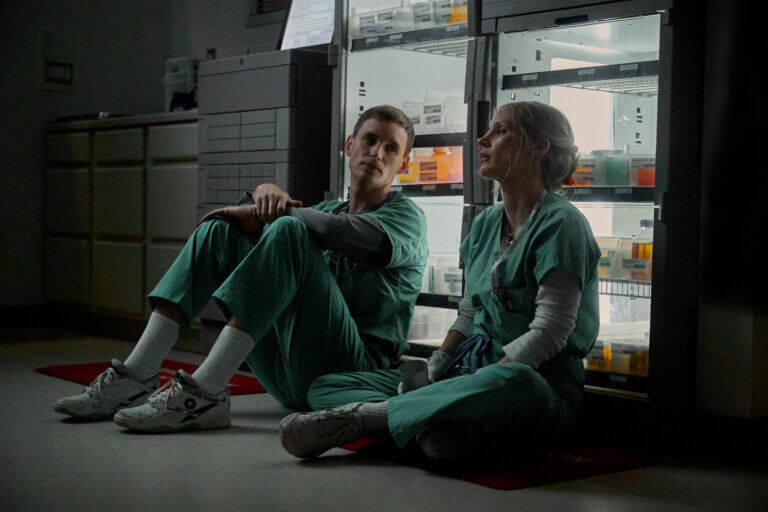 In studying the footage, Redmayne and Reynolds also noticed that Charlie’s head hung slightly low, which the actor incorporated into his character’s posture.

“It was almost as if he was being held up by the collar as if all that emotion was being held in there,” noticed Redmayne. Yet rather than playing the character hunched, the actor only lowered the angle of his head as if “observing from underneath, from an emotional place.”

Redmayne said portraying the character was not about finding the serial killer in Charlie, but about playing the love and the affection Charlie had for Amy and her kids. After that, he concluded, you only had “that biography to suppress, and just play opposite Jessica and find the truth of that.”

The Good Nurse is currently streaming on Netflix.