Welcome to ACTING UP, the place where we celebrate standout performances in TV, streaming and film. Other than spotlighting exceptional work from recent projects, this feature also shines a light on how certain actors got where they are today. Have a peek and then check out these notable performances to help hone your craft.

Jodie Comer plays a Medieval French woman who bravely speaks her truth after an alleged rape at the hands of her husband’s former friend-turned-arch-enemy in The Last Duel.

(The film was released theatrically on October 15th.)

I spent four-plus hours with Jodie Comer last weekend. It started with a Red Vine-chompathon at home watching Free Guy on a Friday night – and ended with an actual in-theater matinee for the opening weekend release of The Last Duel (complete with popcorn and maybe five others in the theater). As a result, I’ll just say this: I have a newfound appreciation for Ms. Comer’s work.

The latter is a period piece that deals with a He Said/She Said case of Medieval sexual assault that features unfortunate parallels to the world we currently live in. In the film, Comer plays Marguerite de Carrouges, a modern 1380’s Paris woman who gets snatched up by knight Sir Jean de Carrouges (Matt Damon) mostly for the purpose of fulfilling “wifely duties” and conceiving an heir. It’s a time when women were viewed as property by the male patriarchy – and the film comes with more than a few eyerolls thanks to reminders that things like dowries once existed.

When her husband Jean is off on business – which in this film means defending France in bloody battles in the name of the king – we witness a brutal sexual assault of Marguerite by her husband’s former BFF Jacques Ligris (Adam Driver) inside her bedroom chambers. There are differing versions of the traumatic story told through the lens of each main character – and what it all leads to is a high-stakes king’s court where Marguerite’s perceived untrustworthiness could mean being burned alive at the stake.

Naturally, her fate would come down to a court case and jury of her peers? Actually, not so much. The deciding factor is duel to the death between these two former chums: Jean v. Jacques.

Comer’s incredible portrayal of a courageous woman who speaks out as a victim of rape at a time when most women did not speak of such things is where this film’s beating heart lives. It’s a time when most women chose silence instead of a megaphone – so Marguerite’s story is the point, not the bloody battles and ways of men, which has been seen in many films in the past.

Comer shines when her character (with Ridley Scott’s direction and script by Nicole Holofcener, Damon and Affleck) is compelled to stand up when so many women might sit down. It’s Paris in 1386 so her accusation is viewed more as an assault on her husband’s property – than her body – so it’s an incredibly f’d up time in history. The differing perspectives can be best summed up in this exchange between Marguerite and her ego-bruised husband during her life-or-death case:

Jean:  I am risking my life for you.

Marguerite:  You’re risking my life so you can fight your enemy and save your pride.

Marguerite’s chutzpah is a thing of legends – and Comer’s performance nails it at every turn. The fact that it’s based on a true story (and a 2004 book detailing this historical event) makes it all more topical, leaving us with one inevitable revelation:

As screwed up as the world was in 1386, not as much has changed as you would’ve thought or hoped when it comes to the power of men – and the practice of discrediting women victims.

It’s a topic Comer shines a light on rather well.

To audiences that already know her, Jodie Comer is anything but a new “Comer,” having become the youngest woman (at the time) to ever win an Emmy for her role in the BBC drama Killing Eve back in 2019 at the ripe old age of 26.

But it’s likely that mainstream America is in the process of discovering this infinitely talented 28-year-old Brit right now, as she’s currently starring in these two major studio releases – the aforementioned Free Guy (opposite Ryan Reynolds) and The Last Duel. Although the Liverpool-born actress does a bang-up job doubling as software programmer Millie and her kick-ass Lara-Croft-type video-game avatar Molotov Girl in Free Guy, it’s Killing Eve, where she plays the psychopathic Russian assassin Villanelle who’s obsessed with a MI6 agent that won her acclaim.

Other than winning the Emmy and BAFTA award for the role, a deeper dive shows that Comer kicked off her TV and film career back in 2008. After working a ton in the UK starring in shows like Justice (2011), Remember Me (2014) and My Mad Fat Diary (2013-2015), she eventually crossed the pond for a cameo in Star Wars Episode IX: The Rise of Skywalker (2019).

Since then, Comer’s been busy soaring up the IMDb star meter. Other than the aforementioned, she also teamed with actor Stephen Graham in 2021 to star in Channel 4’s Help, where she plays a home-care worker struggling with the realities of the pandemic in the U.K. Graham is an actor Comer credits with helping her earlier in her career when he was blown away by her talent.

As for what comes next, Comer will be reteaming with Ridley Scott for Kitbag, where she will play the wife to Napolean Bonaparte opposite Joaquin Phoenix.

Then, who knows, maybe she’ll conquer the world.

Shakespeare 101: Breaking in the Bard

Shakespeare isn’t everyone’s cup of tea. But for those who veer away because it seems intimidating or stuffy or… Read More

Josh Murray is an actor known for his work in films such as Darnell Martin’s Wish You Well, National… Read More 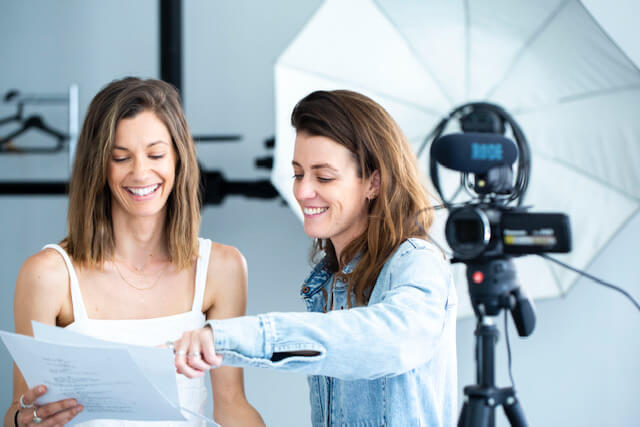 Get To Know the Casting Directors: Alison Fowler and Stephanie Pringle

This installment of Get to Know the Casting Director comes with two interviewees, the women behind the Sydney-based Chicken… Read More