Jordyn Curet recently wrapped filming season two of ABC’s hit series Home Economics, the family comedy about three grown-up siblings and their families in starkly different financial situations. The 13-year-old actor’s IMDb page displays recurring roles in series like Disney+’s Raven’s Home and CBS’ The Neighborhood, but when Curet virtually sat down with Casting Networks, it was her first-ever series regular role in Home Economics that was on the table. Keep reading for a window into the young actor’s casting story, including a completely virtual audition process at the height of Covid.

Hi, Jordyn. It’s been a while since our last chat, and I’m excited to talk about the big role you’ve since booked. What can you tell us about your character in Home Economics?

Shamiah is super sweet and loves her moms, but as time progresses, she starts wanting to be more independent. One example is when my character has a crush, but doesn’t want to tell her parents about it, so she goes to her Uncle Connor instead. As Shamiah’s growing up, she’s getting to the age where she doesn’t want to share as much with her moms, because certain things can be awkward to talk about with them. You know? 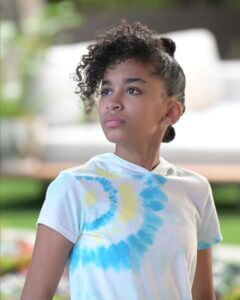 I’m on the other end of your 13-going-on-30 birthday post, but I still remember feeling the same way at Shamiah’s age. [Laughs] What can you share about the process of booking the role?

It was a really long process that started with me doing a self-tape for the role two years ago in early February of 2020. When Covid happened, Home Economics was postponed, so I didn’t hear anything back about my audition. But when production on it started back up again, based on that initial self-tape I submitted, I got called into a producers’ session via Zoom. They asked me questions about my family, as well as how close I was with my mother. At one point, they even asked if I could bring my mom onto the call so they could have a few words with her. Michael Colton was there for the session, too. He’s the creator of the series, which is based on his own family. Everyone on the call was so nice, and I felt really confident with my performance as we went through the script. Afterward, I had the feeling that I’d nailed it because I’d just given it my all. 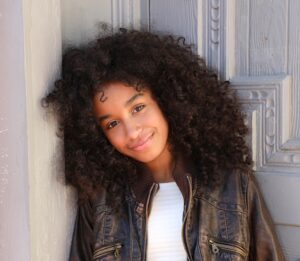 They put me on avail that same day, and I got really excited. But then we kept waiting, and I remained pinned for the next two weeks. I started wondering what was going on, but then my manager called with the good news that I’d booked Home Economics. I started freaking out because Shamiah was my first-ever series regular role. 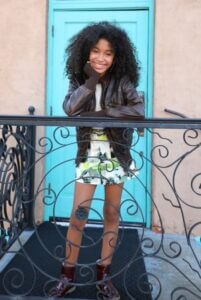 And you booked it all virtually from just a self-tape and a producers’ session?

Yes, that was the really interesting part. I’ve auditioned in person for series regular roles many times, and I’ve come close in the past but never booked one. Then in the middle of a pandemic when I didn’t do one chemistry read and the whole audition process happened remotely, it finally happened. I’ve worked really hard to get here, but I also feel lucky. It was such a dream come true to land Home Economics and get to work with such amazing people like Topher Grace, Caitlin McGee, Karla Souza, Sasheer Zamata, and Jimmy Tatro. I was a little starstruck when I first met them, because I so admire their work. 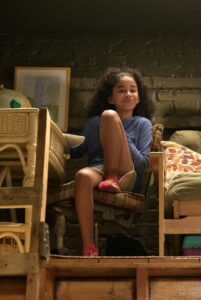 It seems like the cast is a tight-knit crew now, though. You shared in a recent Instagram post, “I love my set family.” Can you tell us more about your onset experience shooting season two of Home Economics?

Sure, and first I’ll say that season one was a lot of fun because I got to meet my on-camera family and grow close with them. And then it felt like we connected even more in season two. It’s just the sweetest cast ever, and everyone made me feel safe and comfortable on set. The people in Home Economics really are another family for me. My on-set moms, Caitlin and Sasheer, are my “ride-or-dies.” They’ve always been so kind and caring, even celebrating my birthday with me. I absolutely adore them.

It’s nice that you share a close bond with them off camera, as well. And I’d love to hear how booking Home Economics has impacted your career so far.

Having a series regular credit on my résumé has led to many other opportunities. One example is getting to do voiceover work for a Lucasfilm project. It’s not out yet so I can’t say anything else, but that was an exciting one. Plus, I’ve gotten to meet so many incredible filmmakers through Home Economics. I’ve watched their other series and movies, which makes it really cool to see how they bring different aspects of their work to our show. The same is true of some of our special guest stars. I remember there was this Zoom table read where I got to first meet this person who’s on an amazing Netflix show that I love. I was trying to keep my cool and not fangirl too hard, but I was freaking out on the inside!

The 13-year-old actor shared one last anecdote before the interview wrapped. “We went to Disneyland for my birthday, and right where we were checking into the park, there was a huge sign for Home Economics,” Curet recalled. “It was a magical moment and felt rewarding to finally see all my hard work pay off in that way.” Those interested in learning more about the young actor’s experience filming the popular ABC show can check out her Instagram page, which includes some behind-the-scenes photos from shooting the series.