In case you missed it, Netflix released Archive 81 earlier this year, and Jaxon Rose Moore appears in the mystery thriller series that TVLine calls “wildly popular.” The young actor, who recently turned 11, virtually sat down with Casting Networks to share the story behind booking a recurring role on the show. Keep reading to learn how Moore landed Archive 81 in between math and reading tests.

It’s great to virtually meet you, Jaxon, and I’d love to start with your character on the series. What can you tell us about Emily Turner?

She’s the sister of the show’s main character, Dan, who’s played by Mamoudou [Athie]. He and Emily have a really strong connection in Archive 81. As far as the character, herself, she’s a very unique little girl. Emily is different and interesting, a super talented individual. My character observes everything and may be a little bit creepy, but she’s also really brave. There’s this line in the show where she says to Dan, “I see ghosts all the time – don’t you?” The way Emily poses the question is casual, as if she were making a normal statement. That’s one example of how my character can come off a little creepy. There’s also this eerie music in the show called the “Visser Tune,” which Emily starts playing on the piano a lot.

I saw your post on Instagram about it — that tune will stick with you! And what can you tell us about the process of booking the role of Emily?

The initial self-tape I did for the role was pretty normal. I went to school first and took a math test, which I wasn’t excited about because I don’t like math. But afterward, I got home and did the audition, which went well. I thought the script was really interesting and exciting — the show looked amazing! I didn’t think the callback went so well, though. It was done over Zoom on the same day that I had a reading test at school, as well as two other auditions. I had so many different words running through my brain between all the audition sides I’d memorized and the reading passages from my test that were still fresh in my mind. 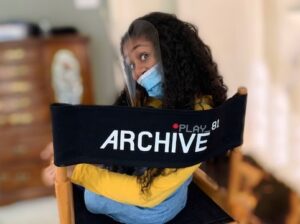 I’m impressed you were able to keep them all straight!

Thanks. I got on Zoom for the callback, and both “Miss Rebecca’s” [showrunner Rebecca Sonnenshine and director Rebecca Thomas] were on the call. One of the “Miss Rebecca’s” asked me to do a simple adjustment after my first time doing the scene. There’s a part where Dan tells me not to play the Visser Tune, and I ask him why. She wanted me to do that part differently the second time and whisper the word “why.” But when I did the scene again, I completely forgot her note and basically yelled it. I was so mad at myself for not remembering a simple adjustment and went to my mother almost in tears after the callback finished. I really liked the script and had wanted to be a part of the show. So when my mother got the call that I had booked it, I almost started crying tears of joy. I thought my callback had been awful and was super surprised to hear the news. She reassured me that we all make mistakes once in a while and that it had been a really good callback overall.

It sounds like it, and I think actors of any age can find encouragement from your casting story. How was your first day of filming?

Well, I live in Georgia, and we had to make an 11-hour drive to Pittsburgh where Archive 81 filmed because I booked it as a local hire. The car we used to get there was as old as me, and we all know that Georgia does not have Pittsburgh weather. The car sat in freezing temperatures without being started for about a week because we had to quarantine once we got there due to Covid-safety rules. When the first day of filming finally rolled around, I was supposed to self-report to set with my mom because I was working as a local hire. But the car wouldn’t start. We weren’t allowed to get an Uber because of Covid-safety rules so production had to coordinate sending transport to come get us, and we ended up arriving to set almost an hour late. 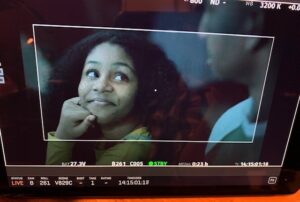 I’m glad you ended up getting there!

The car problem wasn’t fixed, though. We had one mechanic look at it, and he couldn’t help us. The second guy that checked it out happened to have the same car and knew how to get it started. He told us to leave the car running, pack our bags, and drive back down to Georgia without ever turning it off. That included pit stops and everything. The car issue hadn’t been completely resolved by the time of my next shoot date for Archive 81 so production flew us up to Pittsburgh for that one. But we missed our first flight! The gate attendant literally watched us running toward her and made eye contact with us as she closed the door right in our faces.

Wow. It sounds like you overcame a lot of obstacles to be able to shoot your various episodes in the series.

Yes. The car was up and running for my third trip to shoot in Pittsburgh, but then its heater failed. My mother and I had to be wrapped up in three blankets each in order to be comfortable, but we made it. By my fourth and final trip to film on location, we had bought a new vehicle. It was smooth sailing then, and the heater in this car worked really well on the drive up north. We even had “butt-warmers” in the seats!

I’m so glad you were able to film it and be a part of such a big series. Can you share a little about how the opportunity has impacted your career?

People have really started to notice me in a new way, which has been cool. Before the show, I felt like a small-town actress, and now people are writing biographies about me on the internet. Some of them are pretty accurate, but others exaggerate things just a pinch. One said that I earn more than two million dollars from my acting career. [Laughs] I’d love to have two million dollars. I could get my dream car and already have all my college tuition taken care of. I want to go to Spelman College with my best friend, and then we can be roommates.

Before the interview wrapped, the 11-year-old shared more about the fun experience she had filming the popular Netflix series, which involved playing the board game Guess Who? with her co-stars in between takes. “I’m a very smiley person,” Moore told us. “There’s like a 0.9 percent chance that you’ll catch me frowning on set.” Those who want to know more about the young actor’s experience filming Archive 81 can check out her Instagram page, which includes some behind-the-scenes photos from shooting the series.