This installment of My Casting Story‬ features an actor whose audition skills were complimented by the likes of Kerry Washington. We’re talking about Kelvin Witherspoon, an actor whose credits include series like The CW’s Black Lightning and ‬HBO Max’s upcoming comedy Rap Sh!t‬, as well as films such as George Tillman Jr.’s The Hate U Give and Seth Gordon’s ‬Baywatch. Witherspoon sat down with Casting Networks — via Zoom — to share the casting story that landed him on Unprisoned‬, an upcoming comedy series for Hulu that Washington executive produces. The A-lister also stars in it as a therapist and single mom whose father (Delroy Lindo) moves in with her after he’s released from prison. Keep reading for a window into how Witherspoon booked a recurring role on the new series, along with what its executive producer/star said to him on their first day filming together.

It’s nice to virtually meet you, Kelvin. Before we dive into your‬ casting story, I’d love to hear how you’d sum up your character in Unprisoned.‬

My character’s name is Sadiiq. I would say he’s pretty chill and laidback. He lives with his uncle and is not very ambitious — doesn’t seem to be going anywhere in life. He’s up to no ‬good, in general, and is involved in some criminal activity. That pretty much sums him up.‬

I know the series hasn’t yet released and appreciate you still being able to share a bit about your character. Now, what can you tell us about the process of booking the role?

The audition came in from my managers over at Kreativ Media Partners [Kreativ Artists]. I’m always excited when I get an audition because it gives me another opportunity to create a fan. Even if I don’t book the role, my goal is to create a fan through my work. So, when I received this particular audition, I was a little more excited than usual because I don’t normally get to read for Kim Coleman. When I looked at the audition, I saw that the deadline was marked “ASAP.” I’m normally pretty good at submitting my self tape earlier rather than later. The chances of booking skyrocket if you do, but I never compromise the quality of the tape just to get it in early. It was already close to midnight when the audition came in, and I knew my reader wouldn’t be available until the morning, so I just spent that night preparing and going over the sides. In the morning, I did the audition. I made some bold choices and felt confident about the tapes I submitted. In the end, I think I made a fan of Kim Coleman.

Can you elaborate about one of the bold choices that you think made your audition stand out?

Apart from the performance, itself, in my particular scene, my character was smoking. Now, I don’t smoke, but I went to the store and bought a cigar to use for the audition. I’m not big on miming, so I lit the cigar and smoked in the audition. I have my own self-taping studio where I often coach other actors, and I always stress the importance of making bold choices. They shouldn’t distract from your overall performance — ‬in this case, smoking during the scene felt like the right decision. And once you make a choice, you better be confident with it, which is what I did. 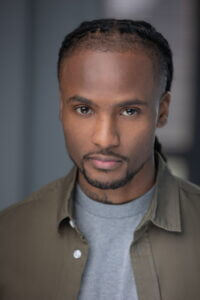 I love that you went the extra mile for your audition. Were you worried about getting in trouble with your building’s management team because of the smoke?

I was not thinking about that. When it comes to self-taping, the rule is to commit and worry about the rest later. I don’t care how loud someone needs to be for their audition or what they need to do to book it, and the same goes for my own auditions. I go into them fully committed to the character; I can’t worry about anything else outside of that. So, I wasn’t thinking about the building’s manager or what they’d say — they’d just have to deal with me later.

It sounds like you were dialed in for the audition, and it paid off! Can you tell us a bit about your experience filming the series so far?

First off, let me say that I’m honored to even be able to share the screen with the‬ legendary Kerry Washington and the legendary Delroy Lindo. When we were shooting the pilot episode and had just finished filming my coverage of our scene, Kerry came up to me and told me I did a great job. She also said that my audition tapes had been above and beyond. Kerry told me that when they came to her, there was no competition — I had the job! She also said I was really great with my actions and with how I used my environment. Kerry’s one of the executive producers on the show and had seen my self tape‬ during the casting process. She didn’t have to say any of that, and it meant everything to me that she remembered my audition and took the time to tell me how she felt about it. I’m all about creating a fan, so if Kerry Washington is a fan of my work, I’m excited about that.‬ 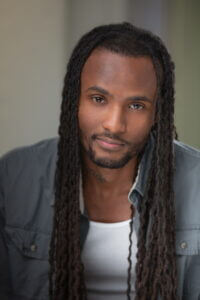 Wow. I don’t know how many people can say that Kerry Washington has complimented their audition skills. And before we wrap, can you share how booking and working on Unprisoned‬ has impacted your career?

It hasn’t released yet, so I wouldn’t say that it’s had much of an impact on my career as much as my craft. What I mean is, I love watching how actors prepare for and approach a scene. I was able to observe them in their element, learn, and incorporate some of what I saw into my own art. Kerry and Delroy were both amazing, as well as the great, theatrically-trained Edwin Lee Gibson‬, who plays my uncle on the show. Getting to watch how they work has definitely had a positive impact on my own craft. And as far as my career, I do think that booking Unprisoned ‬gave me a leg up on booking my most recent project: season two of Showtime’s Your Honor. It stars Bryan Cranston, and its production is ‬based in LA and New Orleans. The casting director for the show is another one I hadn’t read for, so that was another opportunity to create a fan.

Those interested in keeping up with the actor’s career journey can find him as @kelvinwitherspoon on Instagram, where he posts about his work. And should you be an actor curious about Witherspoon’s advice for breaking into the industry, you can check out the book he penned on the topic, The Actors GPS, here.