Stranger Things has become something of a cultural phenomenon, and this installment of My Casting Story features someone who got his biggest TV break to date with the series’ recently-released fourth season. Prior to booking a recurring role on the hit Netflix show, Sasha Andreev was working in front of the camera in various capacities, whether that was appearing in indie films, acting in commercials, performing in PBS Christmas specials, or hosting projects like HGTV’s Curb Appeal. The multi-faceted actor also has a long theater résumé and found time while in the midst of a current run of Twelve Angry Men: A New Musical to sit down with Casting Networks — via Zoom — in order to share his Stranger Things casting story. Keep reading to learn how an off-the-grid van trip to Zion National Park and an unimpressed hotel concierge led to the actor’s big-title booking.

It’s nice to virtually meet you, Sasha. Before we dive into your casting story, I’d love to hear how you’d sum up your character in season four of Stranger Things.

I play a control room operator at a Russian research/prison facility that is unleashing monsters on prisoners. As the character, I’m very devout to my job and to my country. In one pivotal scene, I have to choose whether or not I’ll succumb to the demands of another character. I’m told to open a certain gate that would save the lives of some prisoners but would then also condemn myself and my men to death.

That’s certainly a high-stakes decision for your character, and I appreciate that you didn’t include any spoilers in your response for readers who’ve yet to catch up on season four. Now, what can you tell us about the process of booking the role?

I got the audition back in the fall of 2020 when the pandemic was going strong. I was dying to do something, so my partner and I decided to take a week-long trip in a van and just live off the grid. We flew from Minneapolis — where we live — to Las Vegas and rented a small camper van with a bed and a tiny kitchenette. My partner and I drove it to several national parks and were enjoying canoeing and hiking along the way. Then, as we were driving to Zion National Park, I saw a notification that I had an audition for Stranger Things. I only had about a day to memorize three scenes, which really ended up being six scenes. They wanted takes of each scene in English with a Russian accent and then the same scenes entirely in Russian.

The biggest challenge was that we were essentially in the middle of nowhere. I was in a van on the campgrounds of Zion National Park with very little access to electricity. I certainly didn’t have a clean background or proper lighting, but I did have my phone and a little selfie-stick tripod contraption. There was a small town right outside the gates of the park, so I went there and found the nearest hotel. I walked straight up to the front desk and explained to the woman behind it that I was an actor and had been asked to record an audition for this show. She didn’t seem very excited about it, though. [Laughs] I don’t think she really cared what it was for but seemed amused by this super-hyper guy begging for help. I definitely tried to crank up the charm, and fortunately, she ended up saying I could use the hotel’s conference room. I put on the closest thing I had that would resemble a military uniform — a T-shirt, hiking pants, and hiking boots, which actually all worked. And then I spent two hours recording the scenes with my partner, who doesn’t speak Russian but did his best to give me the cue lines. We wrapped filming them around 10 pm, snuck back into the park — the gate was closed by then — and headed back to the van, where I still had to choose my takes, cut them together, and upload the videos. The thing is, you don’t get much reception in Zion National Park. I had one bar of service on my phone, so the whole process took hours, but thankfully I got it all in on time.

Wow. You overcame a lot of obstacles to get it in before the deadline!

It just goes to show that sometimes the most stressful circumstances yield the best results because you don’t have a lot of time to overthink. Interestingly enough, I also auditioned for a commercial on that trip, and I ended up booking it. So, that vacation in October of 2020 was a very fruitful trip in a lot of ways. I didn’t find out that I’d booked Stranger Things until March of 2021, though. They flew me down to Atlanta for filming, and I didn’t have a lot of information going into it because everything surrounding the show is super secret.

That makes sense. Can you share a bit about your experience filming your episodes?

It was my first time in Atlanta, and I believe that when work takes you out of town, you should maximize your downtime. So, I did a lot of exploring while I was there. Then once I got on set, I tried to be as professional as possible and not act like a total fanboy, even though I’m a big fan of the show. [Laughs] My scenes were primarily with Brett Gelman, who plays Murray on the series. He was really easy to work with and made me feel very at home on set. I also enjoyed meeting David Harbour and chatting with Winona Ryder.  She’s actually named after Winona, Minnesota, and we were both excited to connect over our Minnesota roots. Many people on set were surprised to learn that I’m based in Minneapolis. I think it’s normally assumed that if you’re flying in for a shoot, you’re coming from LA or New York. So, I guess I was there to help prove that talent can exist anywhere in the country. And I’ll add that it felt special to have my episodes directed by the show’s creators/showrunners. The Duffer brothers are these down-to-earth dudes who just also happen to have a huge hit on their hands. 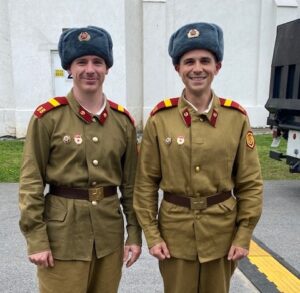 That’s such a fun description of the sibling filmmaker duo. And before we wrap, I’d love to hear how working on the most recent season of such a high-profile series has impacted your career so far.

First, I’ll say that even though I’m originally from Russia and speak Russian fluently, I’d spent much of my career before Stranger Things in non-Russian-related projects.  Most of my work in film, theater, commercials, and in hosting fit into that category. The Russian language coordinator on set was impressed with my Russian skills, though, which felt affirming since I’ve lived in the U.S. for so long now. And there was also a lot of momentum in my career around that time — I shot several other projects in 2021 that are slated to release this year, including the features Bezos and A Taste of Love. But one of the best parts of booking Stranger Things was just the exposure. I recently learned that it’s Netflix’s most-watched English language series ever. So, it’s just been fun to have friends and former colleagues from all over the country reaching out about seeing my work on the show.

Those interested in keeping up with Andreev’s career journey can find him on Instagram, where he shares updates about his work.