Hannah Barefoot is an actor known for her work in films such as Reinaldo Marcus Green’s King Richard and series like NBC’s Chicago Med. But when she sat down with Casting Networks, it was her role in a recently released, big-name commercial that was on the table. Keep reading for a window into the casting story behind Barefoot landing the latest spot for the Infiniti QX60, which took her all the way to Warsaw, Poland, immersing the actor in a cross-cultural filming experience.

Congrats on the release of the new Infiniti QX60 “Beautiful Mess” commercial in which you starred. What can you tell us about the process of booking the SAG-AFTRA spot?

Thanks! This spot was one of the first in-person auditions I had last year. It was with Ross Lacy Casting and was a really interesting experience because the whole thing was just silently reacting. The director wanted the performance to be incredibly subtle, and I remember having no idea of how I was coming off during the audition. I decided to just give my best take on it, though, and the whole thing took about twenty seconds. I got a callback, which was also in person. I was in the room with casting, but the director, producer, writer, and ad agency were all on a Zoom call. It was funny because I could hear the director speaking to me but couldn’t see him. He was saying a lot of encouraging things, though. And at the very end, he yelled from the computer, “You got the job!”

Wow. I feel like you don’t often hear that while you’re still in the room!

Yes, and I’ll add that the callback was on a Friday, I was put on avail over the weekend, and found out I booked it that Monday. Over the weekend, they told me I’d need a passport in order to do the commercial because the commercial was going to shoot in Poland. I hadn’t previously known that, so thank God I had a valid passport and was fully vaccinated so I could travel without quarantining. It ended up being just a 48-hour turnaround from booking the commercial to flying out for the shoot — I was on a plane to Poland that Wednesday and was there for the next 10 days! The casting process was such a whirlwind and a different type of experience for me because I’m primarily a film/TV actor. Auditioning for a feature or series involves a lot of digging into the character you’re playing and story you’re telling. But you oftentimes don’t know right away what story you’ll be telling with commercials. So, it was fun to have had this experience of the casting director guiding me through the action of the Infiniti audition as I imagined myself in the situation and reacted to it. 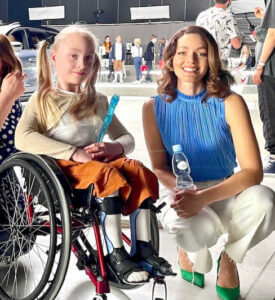 It sounds like the casting process certainly kept you on your toes. Can you also share a little bit about your experience filming it abroad?

It was interesting when we got to Poland to shoot it because we ended up filming two separate spots, one of which will release later this year. The whole experience was amazing — we were shooting in Warsaw, and it’s truly one of the most beautiful cities I have ever visited. I fell in love with the country, as a whole, between its people and culture and food. And as far as filming logistics, there were two American units that had flown over from Los Angeles and New York, as well as a Polish unit. The director was American, as was one of our first ADs [assistant directors], but then we also had a Polish first AD. So, all of our cues would get called out first in English and then in Polish. The children featured in the spot were all local and spoke Polish so it was really a cross-cultural effort, overall, to make the commercial. It was inspiring to see filmmakers from different parts of the world all working together in unison. My previous experience had mostly been within the American market up until that point, and it was a lovely window into the amazing talent outside of the U.S., as well.

That seems like a wonderful perspective to gain while working on a job. You also mentioned your work in features and series, and before we wrap, I’d love to hear any insights you have on the differences between auditioning for commercials versus film/TV?

That’s a really good question because they’re completely different animals. Even theatrically, there can be a big distinction between acting for film and TV. But in general, features and series aim to tell a story of some aspect of humanity. And while you’re telling a story in commercials, too, the end goal of a commercial is to make sure you’ve sold the product it’s featuring. Your character needs to always fit within that scope, and as an actor, it’s important to go into a commercial audition with the intention to best serve that overarching goal. To me, that includes the aspect of surrendering to the process of whatever the ad agency and client want, prioritizing it over telling your truth as an actor. Once you have made your peace with that, the whole commercial experience is really fun. 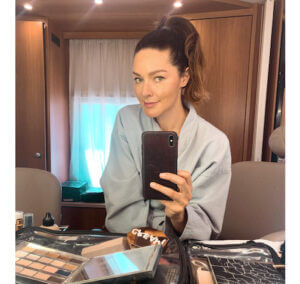 Up next for Barefoot is Dave Franco’s sophomore feature endeavor from the director’s chair, Somebody I Used to Know. She’ll appear in the upcoming romantic comedy next to names like Alison Brie, Jay Ellis, Kiersey Clemons, Haley Joel Osment, Amy Sedaris, Zoe Chao, and Danny Pudi. Barefoot also works behind the camera and has some of her own projects in development. “I’m from Wyoming and have written a really authentic, joyful film called Wyoming Christmas Carol,” she shared. “It’s an indie Christmas rom-com that’s less in the vein of Hallmark and more along the lines of The Family Stone meets Yellowstone.” Her goals for the rest of the year include getting the feature made, which includes starring in it, as well as directing her first short film. In the meantime, though, Barefoot can be seen as the face of the latest Infiniti QX60 spot.