A Day in the Life of a Script Supervisor

For this installment of A Day in the Life, we’re featuring an industry profession with which you may not be the most familiar. The role of script supervisor is vital to maintaining the continuity of a project. They’re tasked with ensuring that all the details of the film, series, or commercial remain consistent from shot to shot and from scene to scene. It’s an important crew position, as well as one that many folks both in and outside the industry tend to misunderstand. For those interested in learning more about the position, we’ve got you covered. Caryn Ruby is a script supervisor known for her work of projects that range from Trees of Peace to Along Came Wanda to Blood and Glory. She took time out to virtually sit down with Casting Networks and provide insight into a day in the life of a script supervisor.

It’s nice to meet you via Zoom, Caryn. Before we jump into an average day for you, can you give us a job description for the role of script supervisor in your own words?

It’s a really big role that is both nuanced and all-encompassing, so it’s sort of hard to describe. But, I can break it down into its main aspects. First, I’ll say that we’re the director’s backup because we make sure that what the director has in mind is what we’re actually shooting. Another aspect of the job is tracking the script to make sure every part of it is covered. Scenes are often filmed out of order, and we keep track of what’s been shot so that nothing gets missed. We’re always looking out for continuity errors, and we’re the conduit between production and post-production. The script supervisor writes down everything that happens on set, and those notes go to the production office, as well as the editor, who uses them to piece together the project.

That makes sense. Now, what does an average day of work look like for you? Feel free to break it up along the lines of whether you’re in pre-production, production, or post-production.

I’ll start by saying that every day is different, especially when you take into consideration the variety of projects on which you could be working. A day working on a film is different from a day working on a series or on a commercial. But I’ll tell you what a general day entails, starting with the post-production phase. I want to begin there because I think it’s actually the least complicated and least known part of the process for script supervisors. It involves compiling a production book from all of my notes that I then give to the post-production team. There’s a lot of material to go through to make that happen, though. If it’s for a feature film, we’re talking hundreds of pages of notes. And I’m going through all of them, making sure there are no typos or inconsistencies. It’s also a matter of reorganizing my notes so that everything’s in order since we shoot out of sequence. Plus, I’m double-checking my math — it’s important to make sure everything’s right in the book before I hand it over because it’s the official record of production. The post-production team will be using it long after I’ve moved on to my next job.

Thanks for sharing that window into your role during post-production. And what’s your average day look like during production?

The first thing I do on set is find the director since I want to be there for all the questions they’re fielding and answers they’re giving. I’m listening to catch whatever’s being decided because I don’t want to waste time on set due to unawareness of any changes. And sometimes I’m the one answering questions because I’ve always got my breakdown with me. Overall, the role of script supervising is a lot of watching, listening, and taking notes. There are oftentimes many rehearsals with the actors before we actually shoot a scene, and I’ll keep track of the direction that’s given. Because, once we’re filming, there are a million things that can be distracting the director. And a lot of the time, I’m the only one that notices if an actor is doing something a little different than what was rehearsed or changing a couple of words. If it is important or could affect or change the meaning of something in the story, I’ll let the director know. Sometimes they’ll ask me to go tell the actor. Also, besides all that, I’m also the person who names the various shots, which you hear stated during the slate. And I always offer to run lines with the actors if there is time. There are like 85 more things that script supervisors do during production, but that covers the main ones. 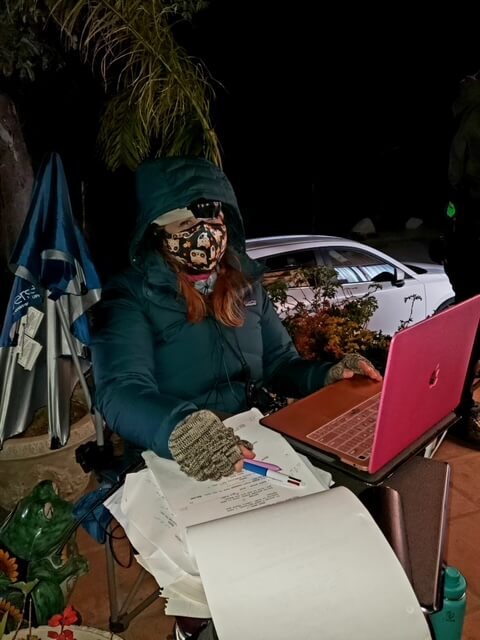 It sounds like a lot, and I’m curious to hear what you do during the pre-production phase.

I feel like that’s the most overlooked part of the role. Oftentimes, production will try to bring the script supervisor onto the project at the last minute. That’s not a good idea because pre-production is a huge part of script supervising. I have to have time to read the script and break it down. By the time I get to set, I need to know the script and all its story beats just as well as the director and the DP [director of photography], who have been on the project usually for months. I have to create documents that track all its specific timelines and locations, props and wardrobe, characters’ injuries, etc. During pre-production, I’ll also look for logical inconsistencies in the script and have conversations with the filmmakers to clarify everything. So, it’s important to bring a script supervisor on early because we can catch things before production even starts, which saves a lot of time and money.

I can imagine! And before we wrap, do you have any advice for those interested in pursuing a career in script supervising?

It’s a really hard job, and it takes a long time to get good at it. So, my advice is to do it a lot. Practice, take classes, read, and learn more about what the role requires. There are a bunch of really great books out there on the craft, and I have a podcast about the profession that features several masters of the craft sharing tips and discussing filmmaking from our point of view. Besides doing your research, I’d also recommend reaching out to other script supervisors for advice. It really is a wonderful collaborative community, and it feels like everyone wants to help lift each other up.

Through every stage of production, this has been a window into a day in the life of a script supervisor. Those interested in learning more about the role can find Ruby’s podcast, Script Supervisors: Unsung Heroes of Film & TV, on Apple, Spotify, and Google podcasts.
—
This interview has been edited and condensed.

Want to land a job in production? Head on over to Staff Me Up and start searching today!