A Day in the Life of a First AC

For this installment of A Day in the Life, we’re pulling back the curtain on the role of a first assistant cameraperson (first AC). For those unfamiliar with the position, the first AC is responsible for the set-up and on-set maintenance of the camera, as well as pulling and keeping focus during filming. In regard to the latter, MasterClass has called the role “one of the hardest jobs on set.” In order to provide a window into such an important position that may not be as high-profile as others, Casting Networks virtually sat down with first AC Natalie Abraham.

It’s great to virtually see you, Natalie, and I’d love to kick things off with a typical prep day for a shoot.

So, before production starts, we’ll get a camera list of what the DP [director of photography] will need. You rent the equipment from a camera rental house, which is where you will prep the gear. They’ll have everything out on the floor for you when you arrive. We’ll build the camera, which includes the body and the lens. Then there’s the wireless focus system. It includes a geared motor attached to the lens and a hand unit, which allows me to pull focus without standing right next to the camera and doing it manually. There’s also the wireless video system, consisting of a transmitter and receivers. The former goes on the camera and sends a feed to the latter, which we put on monitors so we can view the image. Those are the main tech components, and then you have other accessories like tripods, matte boxes, filters, etc. 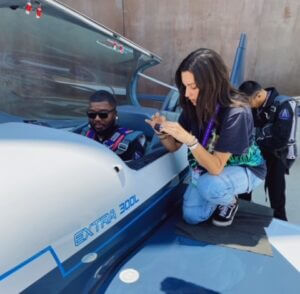 Each camera order will have different specific needs based on the project, but those are the basics. The main purpose of prep is to build your camera in the configuration you will be using for the project and make sure all the gear is functioning properly, so you can avoid issues on the actual shoot day. Then once we’re all done, we’ll typically leave the camera built and put it in what’s called a coffin. That’s basically just a big bin with padding that transports it so we don’t have to take it apart and put it back together on the shoot day.

That leads right into my next question. What does an average day on set look like for you?

So, besides building the camera during prep, the other main part of my job is pulling focus during filming. I’m typically doing that wirelessly, like I mentioned. You’ll see me sitting at my monitor watching what’s on the screen, and then I pull focus based on distance. For example, if the actor is 10 feet away from the camera, I have to set the lens to that distance so they’re in focus. If they start walking closer, I adjust accordingly. I’m also maintaining the camera while on set, making sure it has fresh batteries so it doesn’t die in the middle of the take. Plus, I’ll configure it to how we’re filming. For instance, if the first shot is handheld and then we do a wide shot on sticks [on a tripod], I’m moving the camera to get it ready for the next position while also changing lenses and filters to achieve the proper look for the shot we are doing. So basically, the camera is my baby — I’m always taking care of it. 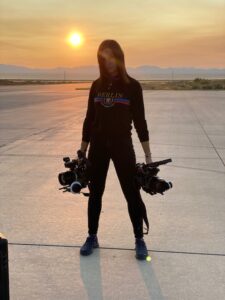 Thanks, and I think what’s fun about the job is that it’s always changing so there’s no typical day at work. Outside of my main responsibilities, every job is going to be different. You’ll have a new crew, cast, location, equipment, and content every time. I could be on a show like Kevin Hart’s Cold as Balls one day, watching him interview athletes while they’re in an ice tub. The next day, I’ll be working at Chrissy Teigen’s house on a commercial for an electrolyte drink or in the middle of a desert in New Mexico filming Richard Branson launch into suborbital space. And I’ve gotten to snowboard at Mammoth Mountain while filming promos for the Winter Olympics. The job specifics are constantly changing, and that’s what keeps it fun for me. 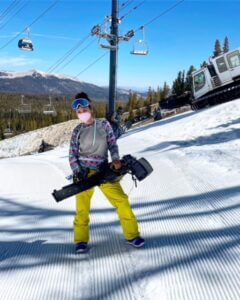 It sounds exciting! Did you always know you wanted to work in this position?

My parents would take home videos of us growing up, and I always wanted to play with the camera. So they bought me my own, and I loved playing around with it, making skits and newscasts with friends on my camcorder. Then in high school, I got more serious about it when I took a TV production class, which was in an actual studio at my school. I have to shout out my teacher, Mr. Dennis Hamilton, who was incredible. He recommended Columbia College Chicago, which is where I ended up going and specializing in cinematography. The interesting thing is that I started out gripping on sets and was gaining experience in that role. But then I went to a shoot where they didn’t have a second AC. Someone asked me to fill the role, and I said I would. A professor once told me to always say yes to an opportunity and then figure out how to do it, so that’s what I did. I had no clue how to perform the role so I asked a friend who was an AC. [Laughs] She lent me her kit and gave me instructions for the position. From there, I just followed the first AC’s orders on set and ended up really enjoying the work, as well as getting good feedback. So, I switched to doing camera assistant work while in school, and then when I moved out to LA, it just took off from there.

Before the interview wrapped, we asked Abraham if she had any advice for those interested in pursuing a career in the camera department. “It’s very much a people-based industry, and you get hired by your contacts,” the first AC noted. “So, while technical skills and problem-solving abilities are important, I’ve found that a good attitude will take you the furthest in this job.”

Looking for a production gig in the Camera department? Our sister site Staff Me Up has all of the latest First Assistant Camera jobs and other behind-the-scenes camera roles. Submit your application and get hired now!