Coming off the season five finale of Snowfall, we wanted to virtually sit down with one of the show’s new faces. Tiffany Lonsdale recurred on the most recent season of the FX drama about the crack cocaine epidemic in 1980s Los Angeles, playing an Iranian doctor named Parissa who relocates to the Southern California metropolis. Keep reading for a window into the casting story behind her big role.

It’s great to virtually meet you, Tiffany, and before we go any further, I’d love to hear how you’d sum up the character of Parissa.

She is full of surprises and a very layered person who possesses a strong will and intelligence. Parissa is multi-lingual, powerful, sensual, and a bit of a sadist, as well. She’s a really fun character to play and one that is very different from other characters on the show. We meet Parissa after [series lead character] Teddy has been injured, and it’s not initially apparent how she fits into everything. It was really fun to talk with our showrunner, Dave Andron, ahead of filming about the relationship between the two characters and how they’re matched in strength. Parissa has the upper hand as a former physician and surgeon, though, because Teddy shows up at her home injured and seeking help. I really enjoyed exploring the different aspects of their relationship, including the elements of power and connection and playfulness. 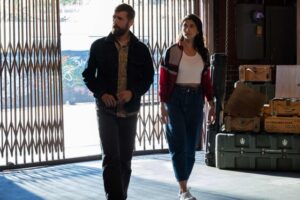 And what can you tell us about the process of booking the role?

It started in October of last year when I was packing for a quick trip to see a friend. I remember I got an email from my agent on a Tuesday about putting myself on tape for Snowfall by that Thursday. I wasn’t sure how I was going to get it done because I was traveling on that Wednesday, but I knew I’d figure it out and confirmed the audition with my agent. I printed out the sides and then got to work the next morning after boarding my early flight. I went over the lines in the character’s Persian accent while on the plane, hoping no one would think I was crazy as I muttered them under my mask. [Laughs] I even had Persian music playing through my headphones to keep me focused during the entire four-and-a-half-hour flight so I could get the lines down.

Wow. You were making the most of your travel time!

Once I landed, I still had a train ride from the airport into the city. As soon as I got to my friend’s place, I was like, “You have to put me on tape right now!” It was 6:30 p.m., the sun was going down, and we didn’t have a ring light or anything like that to use. My window to get the self-tape done was rapidly closing, so we worked with what we had. It was very much a guerilla-style shoot since there was no tripod either — my friend was just holding the phone as they recorded. I gave it my best, though, and we got the self-tape done, so I was able to send it off to my reps on time. After that, I enjoyed the rest of my trip and then headed back to LA. I didn’t hear anything regarding the audition until a week later on the following Wednesday. I was in my bathroom getting ready to go out to dinner with a friend when an email came in from my agent letting me know that things were looking good. I was still curling my hair when the offer came through just seven minutes later, so I had to take a moment and read through it properly. [Laughs] Then the whole time I was at dinner, my reps were negotiating the deal over email. I signed everything the next day and got the scripts. That Friday was the Zoom table read, and then I was working on Snowfall the following week. 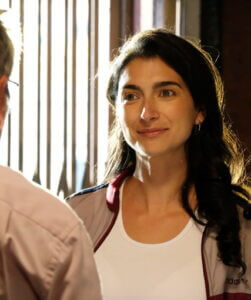 That’s a quick turnaround, going from sending in a self-tape audition to finding out you’d been offered the role in just seven days. And then you began shooting the following week! You posted some fun behind-the-scenes content from the series on your Instagram page — can you share a little bit about your experience filming season five of Snowfall?

I could say so much about what a lovely, inclusive, collaborative, fun, playful, and intense experience it was from start to finish. Joining a team that had already been together for five years could have been quite intimidating, but they welcomed me in with open arms. I loved all the diversity of the cast and crew — every single person brought something different to the table. Plus, it was lovely to shoot locally in LA. On days when we weren’t doing evening shoots, I would take my pup to his doggy daycare, go to work, get done, pick him up, and be at home for dinner. That was such a gift, and it was just fantastic to get to be a part of the overall Snowfall story.

It sounds like it! And how has playing Parissa on Snowfall impacted your career so far?

First, I’ll say that I have a newfound respect for the medical shows that we all love to watch. There was some intense blocking that took place for one of my scenes, which involved a lot of blood. It was a huge challenge, and we thankfully had a medical tech person on set to help with its various elements, including continuity. So, playing Parissa definitely came with new specialized skills. Plus, it helped me grow in my ability to ask questions and take the time I need with the character. I really had to know what I was doing on the technical side of things in order to relax into the mood of the scenes. The sadist bit of Parissa comes into play, for example, during the bloody scene I mentioned — she derives some pleasure from the pain that Teddy goes through as she tends to his wounds. Carter [Hudson], who plays Teddy, was an absolute trooper. I just want to give him a shoutout because he was covered in fake blood and salt for hours, and his dedication to the scene really helped me, as well.

Before the interview wrapped, Lonsdale added one last thing that came from her casting story. “I want to address the actors reading this, especially if they’re feel discouraged at the moment,” she asserted. “I’ve been in this industry a long time and had hundreds of auditions, so I just want to encourage you to keep going.” Those interested in following along with the actor’s own career journey can find her on Instagram as @tiffanylonsdale, which includes posts about both her work and life.