[Disclaimer: In no way does this article mean to imply the only medication you should take for COVID is streaming TV. Consult your doctor to see if they recommend podcasts as well.]

Like chicken soup for the soul, escapist entertainment is reported to have its own natural healing properties. Though no doctor in their right mind would prescribe a streaming series to cure the ’Cron, there are certain things laughter, tears, and full immersion into a well-crafted film, series, or standup special can do to kill quarantine time.

With the newest variant on the loose, I recently found my vaxxed/boosted self dealing with a case of Covid-22 (aka Omicron). Fortunately, I suffered only mild, flu-like symptoms, but as I holed up with my laptop and iPhone in the only extra room our home allowed for, I found myself with lots of time alone and very real entertainment cravings to offset the brain fog.

After all, given the CDC’s recommendation about how contagious Omicron is and the quarantine time recommended with a positive PCR or at-home test, I knew I was going to be looking at the same four walls for at least five days — probably closer to 10. Luckily, my dance with the virus wasn’t severe. So, before I give you my prescription, I’d like to quickly thank the Academy, its performers, and Moderna, who made my stay in isolation truly palatable.

Start with something tender…

When I first saw the ad for The Tender Bar appear in my Amazon Prime carousel, my first thought was: Ben Affleck grew a beard – cue the Oscar talk. But once I got into this sweet little George Clooney-directed film, Affleck matched the beards performance with his own A-game. He once again dusts off the Baah-stin accent to play the sage Uncle Charlie, and it works well. The biggest surprise here is probably Tye Sheridan, who plays Charlie’s nephew, an aspiring writer with a kind soul and propensity to never get over the same girl. Sheridan shines in the role and I found his innocence to be a refreshing way to forget I had “the vid” for two hours. 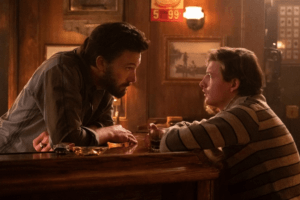 When I was down for the count fighting the ‘Cron, I craved something light, familiar, and awesome to get me through the haze of early quarantine. For that reason, I gravitated to the one person I knew who could bring joy into my life: Bo Burnham. In between zinc lozenges, I threw down all three of his comedy specials again on Netflix: What, Make Happy, and Inside (currently up for two Grammys). Having Burnham’s oeuvre at the ready was exactly what the doctor ordered. As the perfect blend of performance artistry, stand-up spectacle, and musical comedy, I continued to lay in awe of Bo’s brilliance and the things he’s created. 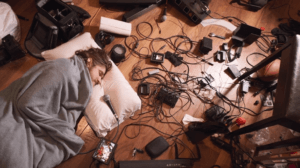 And a quick splash of The Aristocrats…

Bob Saget passed away the day my symptoms started, so as the social-media tributes started pouring in, I felt a strong urge to revisit a documentary from 2005 called The Aristocrats that Saget made an appearance in about a joke all standup comics know — and how their tellings of this joke vary dramatically. There are many classic versions of the joke in the documentary, from people like George Carlin to Paul Reiser to Sarah Silverman to Mario Cantone. But it was Saget’s epically NSFW version I’ve always remembered most from this doc — because it’s the first time I realized the late star of Full House and former host of America’s Funniest Home Videos had one of the darkest minds of anyone who’s ever had a camera pointed in their face. It’s so dirty, in fact, that I can’t in good conscience even link to it — so if you don’t believe me, look it up.

With a healthy dose of real-life in limited series form.

There’s something about feeling out of it that had me craving things with the word sick in them. To that end, I binged Hulu’s Dopesick rather quickly. Not sure who is sicker — the American political system for letting America become hooked on opioids, or the Sackler family who willingly got tens of thousands of Americans hooked on heroin in the form of OxyContin. Having said that, Michael Keaton absolutely shines in this series (per usual) and there are many other great performances in it to note as well. Namely, Kaitlyn Dever, Peter Sarsgaard, John Hoogenakker, and Will Poulter, who I also wrote about during my interlude with Covid. 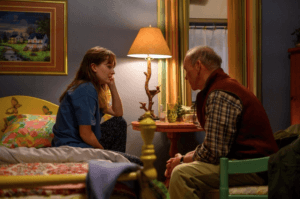 By day 5, I started popping episodes of The Office like they were vitamin C. The sitcom holds up remarkably well. I hadn’t watched episodes for years when I chose to revisit the series in syndication and Peacock. Most of my consumption circled the last two seasons — which I didn’t remember watching from the post-Steve Carell era. I found myself loving many of the performances of the late adds to the series — namely Ellie Kemper, Jake Lacy, and Clark Duke. They say laughter’s the best medicine — and on this show, there really is so much medicine.

Finally, take a trip to the Ozarks.

The dark days of Omicron demand a smidge of something darker so that you feel better by comparison. Enter Ozark, the critically acclaimed, so-dark-you-need-night-goggles Netflix series. The first seven episodes of this fourth and final season dropped on January 21st — and with it, has come a new character in the form of the ambitious nephew of drug cartel kingpin Omar Navarro. His name is Javi (Alfonso Herrera) and he offsets his uncle Omar with an Ivy League degree and killer charisma. It’s great to see the usual powerful performances from Julia Garner, Laura Linney, and Jason Bateman, but the sprinkling of this new character adds a nice new layer to the series that’s already as addictive as the product they’re all pedaling.

Given I got my negative PCR result two days after the Ozark S4 premiere, I willingly spent my last days of quarantimes in the high-drama unfolding in this messed-up Missouri vacation destination. With my entertainment diet complete, it was time to move freely in society again.