A Much-Deserved Comedy Spotlight on the Cast of Weird: The Al Yankovic Story

It’s hard to find a good laugh these days. From antisemitic posts from Kanye and Kyrie (Kan-yrie) to Twitter’s takeover to politicians trying to take over women’s bodies, there are lots of reasons to be dead serious right now. Add in a smidge of extreme woke-ism and it would seem Hollywood is having a hard time figuring out what qualifies as a mainstream comedy these days in the realm of Wedding Crashers (2005), The Hangover (2009) or Bridesmaids (2011).

Even more proof came when Bros didn’t seem to cut it despite its best effort to break through as the first mainstream gay rom-com, much to the chagrin of many – including Billy Eichner.

All the more reason that when a film like Weird: The Al Yankovic Story comes around (having premiered on The Roku Channel November 4th), a heartfelt ‘Finally!’ is in order. After all, I grew up an ‘80s kid so I remember Weird Al’s emergence into culture, the silly spoofs of classic rock songs such as “Another One Rides the Bus” and “Eat It.” Truth be told: I even liked UHF (1989).

But a whole movie about Weird Al’s life? At first, it might seem as much of a stretch as a fully played accordion. But this is the world where Jason Sudeikis and Apple TV+ birthed the award-winning series Ted Lasso from an NBC Sports promo – so there’s something to be said for getting proof of concept. That’s how this one came to life, first as a Funny or Die short in 2010, and it offers a cool snapshot of what this film ultimately became, which is wildly fun and funny.

It’s bogus biopic (written by Yankovic himself and Eric Appel who also directed the film) with truths sprinkled in that manage to fuse a traditional rock star rise-and-fall arc with phony pop culture morsels you almost wish were true. And some of it is. But what? That’s left to you to figure out – though I’m fairly certain Weird Al was not asked to replace Roger Moore in the Bond films. Suffice to say, none of this would be possible without the excellent performances of its cast (quick shout out to casting director Wendy O’Brien), several of which I’ll get into here.

You probably know Daniel Radcliffe from the hundreds of Harry Potter films he once did. But ask yourself one question: how well do you really know Daniel Radcliffe? I’d venture to say, not super well. He’s quite funny (see Extras), and upon being cast as the polka-playing-accordionist with a dick dad and a dream, it instantly became a match made in Hollywood heaven.

In fact, I’m not sure I’ve seen an actor commit to this dead serious of comedic character since Robert Hays as Ted Striker in Airplane! (1980). In that film, Hays tried very badly to land that plane while sweating buckets – and here, Radcliffe commits himself with equal rock star gusto, landing Weird Al for modern-day audiences in a performance he crafts, well, like a surgeon. 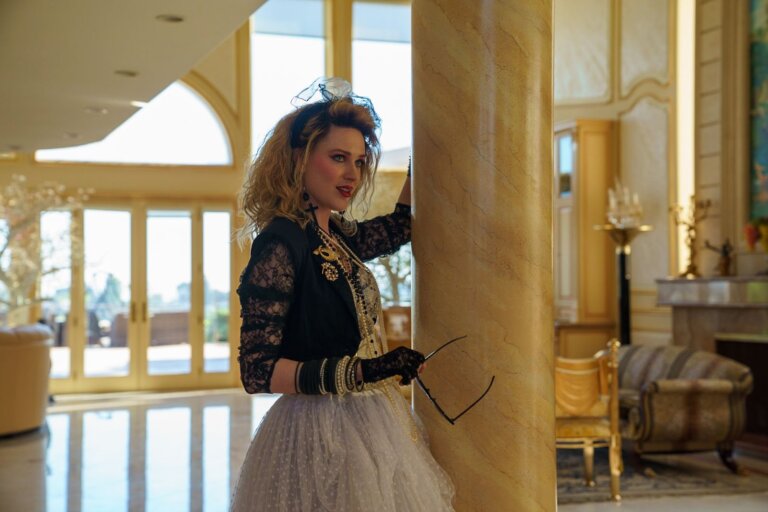 There’s a moment in the film, the fabricated part, where Oprah (played by Quinta Brunson) breaks the news that when Weird Al covers a song, it leads to double the album sales for the original track – or what’s being called the “Yankovic Bump.” When Madonna catches wind of this, she wants in ASAP and tracks Weird Al down at his gluttonous Beverly Hills mansion with not one, but four in-home Jacuzzis. She asks Weird Al if he knows her song, “Like a Virgin.”

Weird Al: I’ve heard it. I’m curious: Is that song autobiographical?
Madonna: Yes. Technically, I am a virgin. Except for the fact that I’ve had a lot of sex. I mean… a lot.

Rachel Wood has young Madonna’s inflection, trademark gum chewing and flirty everything down. It’s uncanny how spot on of a portrayal it is and one of the more entertaining parts of the film is watching her pine to get Weird Al to not just do her song – but anything to unwind the massively successful career he’s put together as she embodies the ‘bad influence’ trope.

And at this, Rachel Wood is so very good.

As a 4-year-old, I remember huddling around a radio with my brother listening to Dr. Demento’s radio show. It was an entertaining mix of spoofs, mash ups and dark yet funny songs like “Dead Puppies” and “Fish Heads.” That was probably the first time I heard Weird Al and until this film, I hadn’t seen Dr. Demento make an appearance in a movie before. But Rainn Wilson brings him to life on the big screen. The actor who nailed Office sycophant Dwight Schrute for almost a decade does a bang-up job encapsulating Demento’s showman bravado. (It was his radio show that first gave “Weird Al” his first shot). And although it may not be a spot-on Dr. D, Wilson gives this eccentric legend a more-than-honorable mainstream portrayal.

As two veteran actors who’ve been doing good work for a long time (and even together just recently in the polarizing Marilyn Monroe biopic Blonde), Nicholson and Huss deserve a mention as they humorously play Weird Al’s parents (Mary and Nick) who don’t exactly support their kid’s musical gifts at an early age. In fact, no line better represents the parody that is this film more than Mary’s unmotherly dinner table advice to a young Weird Al: “Your dad and I agreed it would be best if you just stop being who you are and doing the things you love.”

Then there’s Huss of Reno 911! fame, who beats a traveling accordion salesman (Thomas Lennon) within an inch of his life after trying to sell his son a “Devil’s squeezebox.” Says the salesman to the young Weird Al about the accordion and the girls who flock to it: “You’re going to need a lifeguard because you are going to be drowning in so much p—-.”

That’s the kind of movie Weird: The Al Yankovic Story is so get ready to appreciate a film that may not land in the pantheon of great music biopics like Bohemian Rhapsody and Rocket Man…

But it surely could open for them.

Weird: The Al Yankovic Story is now playing – for free – on The Roku Channel.

Related articles:
Why It Matters To Have a Great Reader for Self Tapes
Entertainment Business Manager Jeff Bacon Has Some Financial Advice for Actors
The Best Things to Happen in Movie Theaters This Year (So Far)