On the Verge: Amanda Jaros

Amanda Jaros is known for films such as American Pantheon’s A Doll’s House and series like NCIS. She’ll also appear in the upcoming ABC limited series Women of the Movement, which premieres in January 2022. But when Jaros virtually sat down with Casting Networks, it was 1883 that was on the table. The upcoming Yellowstone prequel series stars Sam Elliott, Tim McGraw, Faith Hill and Isabel May. We caught Jaros ahead of the series’ December 19 premiere on Paramount+ to hear how she was feeling about being an integral part of such a high-profile project, one that could very well be a turning point in her career. 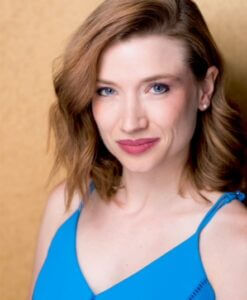 It’s great to virtually see you, Amanda, and congrats on landing a guest recurring role — you’re in 9 of the 10 episodes — on 1883. How’d it feel to find out that you booked it?

Once I read the character description, I knew that I was right for the role; I was really connected to the material and to the character. But it was surreal when I got the news that I’d booked the job, because the turnaround was so quick. I was invited to train for the role at “cowboy camp” at the beginning of August … which I found out just 48 hours before needing to depart for Texas. That was all the time I had to coordinate the rest of my life before leaving to film the series until the end of December.

Wow. It sounds like everything happened quickly, but it all fell into place. What can you tell us about your character Alina?

She’s an Eastern European immigrant who ends up joining the Dutton caravan in order to have the opportunity for a better life out west. The group consists of people from a number of different European countries. Alina, herself, is a Slovakian who speaks German and is married to a Romanian man. In the 1880s, there were really high unemployment rates and overcrowding in the kingdom of Bohemia, which led to a wave of European immigrants coming to America. Where they landed was sometimes not the place they wanted to call home, though. So, Alina and her husband end up heading west with the Dutton family and a few cowboys that lead the way. Since 1883 is a prequel series to Yellowstone, it is centered around the Dutton’s heritage and their journey to the renowned ranch.

How interesting! What was your process like for preparing the character’s accent?

I was previously cast in a movie called My America from Italian director Marcello Daciano.  My role, Laura, was rewritten in order for me to play a Czech immigrant so I’d already studied the accent and language. For that film, I had worked with a Czech tutor who was able to help me with the dialogue in My America, but I felt a bit rusty on my accent. So, I reached out to a friend who is based in the Czech Republic to help with vowel sounds. She was so sweet to send me a recording by a local with some words, sounds and sentences for me to practice. Alina’s accent is a little more mixed, though, since she’s married to a Romanian, traveled with Germans and Russians, and is now based in America. Her accent is a bit more of a blend that reflects the different cultures and people with whom she’s been spending time. 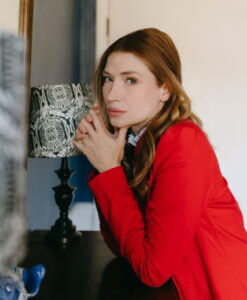 I’m looking forward to hearing it in 1883. And it sounds like other prep work included learning some new skills. What was cowboy camp like?

It was really fun to essentially become a cowboy. I already had basic horse training from trail rides, but this was on a whole different level. We would ride horses for hours a day and play different games to get comfortable with riding close together. Plus, the horses had to get used to riding near covered wagons and cattle. I also learned how to drive the wagons, herd cattle and rope the cows. We had firearms training, and our armorer kept things really safe. This production was so diligent about putting all the precautions in place to ensure people’s safety. Altogether, it was three weeks of just learning what it was like to travel in the 1800s. It was so much fun, and I’d do it again in a heartbeat.

It sounds like it! And before we wrap, I’d love to hear how landing the role has impacted your career so far.

I’m still filming, and the premiere on Paramount+ hasn’t happened yet, so it’s all still pretty lowkey aside from press announcements. But there’s definitely more movement with people taking interest in getting to know me or having me audition for their projects. I’m working more closely with a publicist and my managers on the next steps of my career. Once the series premieres, we’ll see what new opportunities it brings. In the meantime, I’ve just been so impressed with the endurance of every crew and cast member on the show because it is a physically draining production. We work long hours — I wake up almost every day before dawn and go to bed long after the sun sets. Plus, we do a number of really grueling stunts. It’s all worth it though; to make such a beautiful, cinematic piece.

Those interested in keeping up with Jaros’ acting journey can find her as @AmandaJaros on Instagram and Twitter, two platforms on which she periodically posts about her work.