From influencers to podcasters to standup comics, we’re continuing to explore the various areas of content creation. We wanted to highlight the latter role with this installment of Meet the Creator and recently sat down — via Zoom — with Michael Palascak. The comedian was a top-five finalist on Last Comic Standing and has performed on late-night shows hosted by the likes of Jay Leno, David Letterman, Conan O’Brien, James Corden, Stephen Colbert, Craig Ferguson and Lilly Singh. Keep reading for a window into Palascak’s journey with standup that led him there.

It’s great to virtually meet you, Michael, and I’d love to kick things off with your “origin story.” How did you start in comedy?

I think that somewhere in the brain of a comedian is this need or desire to entertain. That doesn’t necessarily make you funny, but that’s where it starts. A big part of that for me was growing up as a middle child. Conan pointed out that a lot of comedians are middle children. I wasn’t ignored by my parents growing up or anything like that — they were very present and showed me love — but a desire for attention has just been in me ever since my younger brother was born. Plus, we moved multiple times when I was growing up, and I think that played a part in wanting people to laugh at the things I said. It meant they liked me. Because, when you’re seven and you move from Buffalo, New York to Indiana, all your friends back home might as well be dead. [Laughs] I mean, there was no social media back then, so you didn’t really see them after that. I think my desire to make new friends definitely had a hand in me wanting to make people laugh when I was growing up.

So, it started at a young age?

Second grade was when I realized that standup was what I wanted to do. I was never the “funny kid” in class because my parents were kind of strict and I was afraid of getting in trouble. This one time, though, a friend said something really funny in class when another teacher was visiting the classroom, and she told him that he should be a standup comedian. I remember thinking very distinctly, “No, that’s what I’m going to do.” I didn’t tell anyone, but that was the first time I realized it. And my parents were also funny without meaning to be. They’re just happy people who are really comfortable with being themselves. My dad would come home from work every night and ask if anybody had a joke, so I got used to telling them from a young age. I would get joke books and just keep going with them — one after the other — to the point where my family would basically “give me the light.”

When you’re performing standup, if they “give you the light” [start shining/flashing a light], that’s your cue that your time is up and they want you off the stage. So, I would “get the light” from my family, starting at the age of six. They’d be like, “Alright, that’s the last joke — we have to eat dinner now.” [Laughs] But growing up, I did feel like there was a respect for comedy, even though my dad’s work as an accountant was far from the realm of standup. He used to ask my brothers and me if we knew what the hardest job in the world was. The answer, according to him, was being a standup comedian. “Until you get the crowd going, it’s the hardest thing to do,” my dad would say. I’ll also add that my style of comedy was influenced by that time in my life. I grew up with my family just hanging out with everyone there. I have this clear memory from childhood of watching a ventriloquist on TV with them, and I remember loving the feeling of everyone laughing together. On the flipside, I thought it was stupid when I couldn’t watch a movie with them because of its content — I was too young to be allowed to see it. That’s what led me to performing comedy where I don’t swear or talk about sexual stuff that could shut certain people out or make people feel uncomfortable. I want it to be accessible to everyone.

That makes sense. I also love that your comedy was honed and encouraged from an early age. And then it just progressed from there?

Yes, I spent a summer in Chicago after my parents moved again. I didn’t know anybody because I hadn’t grown up in the area and was just hanging out at the standup comedy section of a bookstore when I found a book on standup. In the back of it, there was a list of open mics for new talent. One of them was 15 minutes away from where my parents lived, so I called and signed up. I spent the next two weeks working on a set and then went and performed it. 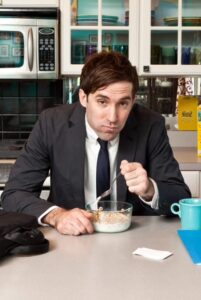 Wow. You dove right in. Do you have any advice for readers interested in getting into standup, themselves?

You just have to get up on the stage and do it. My first time was rough — I would only get a laugh when a joke fell flat. I’d be like, “Well, that didn’t work.” And then people would laugh. I wish I would’ve gone into it more comfortable with the fact that when you’re doing something for the first time, it’s likely you’re not going to be good at it. So, just getting up on the stage and talking is a really good first step. It literally just requires you to write your name down on the sign-up list. And then you keep doing it more and more, building from there. You work up to getting the 5 or 10 minutes you need to do guest spots at comedy clubs. Then if they like you, they’ll ask you to host the next time. From being the host, you move up to being the feature and then the headliner. That’s how I did it, and after about four years of performing standup post-college, I started to believe in myself more. I think that made all the difference. It can be easy to feel a sense of failure when you don’t get booked or the crowd doesn’t laugh during your set. I learned that half the battle is keeping yourself from thinking that way.

And then you started booking all the late shows?

I got scouted and did some festivals and contests. I got flown out to LA and Vegas for a couple of different industry things. From there, I got a manager and started auditioning. Three years after that, I moved out to LA and got to perform on The Tonight Show and Letterman and all that, through my manager.

It sounds like it’s been quite the ride. Before we wrap, do you have any last insights about standup to share?

I think the most important thing is to be funny and original — your material should come from you. When I’m talking on stage, I try to keep it as close as possible to how I would talk to someone offstage. The main thing is giving yourself the freedom to be who you are. People may push up against some of your opinions, but if it’s funny, it’s funny.

Those interested in learning more about the standup comedian and his work can check out his website. Palascak also regularly posts his bits on Instagram and TikTok.

With the month of July comes a slew of new series premiering on streamers. If you’re feeling lost in… Read More

Is there any greater pleasure than pulling out a good book on a sunny day? The answer for actors… Read More

Voiceover opportunities are available now, as never before. Here are eight nuggets to help you become a successful working… Read More

A Day in the Life of a Script Coordinator

Children of the ‘90s may well remember Face, the animated host of Nickelodeon’s preschool programming block back in the… Read More