Whether pranking his mom in a TikTok video or helping BuzzFeed figure out which European language is the sexiest, Massi Pregoni’s cultural identity plays a large role in his work as a performer. The creator has dual citizenship in Italy and the U.S., and his content demonstrates how Pregoni can tap into both cultures with his characters. The same goes for his work as an actor in film and TV — fans of the HBO Max series Made for Love can see him channel an American “bro” type in its first season. Pregoni sat down with Casting Networks to share about his cross-cultural journey that led to more than 400,000 followers on TikTok, complete with a change in both name and country along the way.

It’s nice to meet you, Massi, and I’d love to start at the beginning. Can you share the “origin story” of how you started creating your own content that resulted in your current status as an influencer?

I’ll start by saying that I was actually the shyest kid in school growing up in Rome. At that time, the arts weren’t really pushed in the education system like they are here. Maybe you played soccer and planned to become an athlete, or you studied to go into a traditional field like economics. Acting and creating content weren’t really presented as career options growing up. Having said that, though, I was also too shy at the time to perform and be a part of anything creative, even if it had been more encouraged.

That’s fascinating to hear because talking to you now, I wouldn’t have guessed that about young Massi.

Actually, my full first name is Massimiliano, and everyone called me Max growing up. I relate that name to the kid who was too shy to do anything he felt — making videos, expressing his emotions, or even dating. I was 17 years old when I left everything in Rome to come here and my life completely changed. I’ll never forget the date July 24, 2015. That was the day my brother and I said goodbye to my dad and got on a one-way flight to California. After growing up with a parent your entire life, it’s a surreal moment to hop onto a piece of metal that’s taking you to a whole new country where you won’t be seeing them around as much. Why? We did it for the opportunity because we had U.S. passports, which are priceless. My mom is American so we have dual-citizenship, and it’s been a crazy ride ever since arriving in the U.S. Now I’m here in Los Angeles, sitting down for a Casting Networks interview with you. 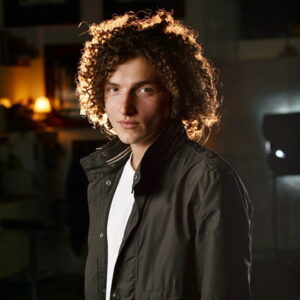 And now you go by Massi.

Yes, which is still a form of my name but a different side of me. As I grew up, I got more confident and comfortable in my own skin. Getting into the entertainment industry was a part of that. When the pandemic hit, though, productions were paused and no auditions were happening. I was bored at home, and that’s when I made a TikTok account. I didn’t tell anyone about it because I was scared of people judging me. That’s been a fear I’ve had my whole life. It used to really affect me when people directed negative comments my way, and the last thing I wanted was judgment pouring in about a video of me trying to be funny online. So when I got on TikTok, I didn’t tell anyone about it.

I had zero followers and zero likes at the beginning, but I was putting out videos that I’d always wanted to make about my life and moving to America. I needed a way to let out all these stories and ideas and feelings that had piled up inside me. Since I didn’t tell anyone about my TikTok account, I felt really free to express myself with what I created. It was more about having that outlet — I didn’t think anyone I knew would ever see my page. But then my videos started getting a lot of views and going viral. The people I had worried about still ended up finding my content and judging me, but I reacted in a new way. I had this epiphany that people are always going to have something to say, no matter what you do. So the lesson is to do what you want and not worry about what other people will think.

I think that’s something we can all take to heart. And you touched on it already, but I’d love to hear more about what inspires your videos.

My life experiences and emotions definitely influence what I create. For example, I was a little sad the other day so I created a video that was more on the emotional and deep side of things. It made me feel better, and people who were in the same spot could maybe connect with it, as well. When I’m feeling happy and light, on the other hand, I’ll write a funny skit. And then I draw from what I’ve experienced for a lot of the videos, such as my first date in America with a real American girl. That came from a very real place. [Laughs] So, my life and the videos I make go hand in hand. I’ll also find inspiration from other content and then put my twist on it. You know, make it Massi.

That makes sense. How about your process for creating videos?

Honestly, every video is similar to a self-tape audition. Casting will always say that they need to see and hear you clearly, and the same applies to creating content. With self-tape auditions, you are your own producer, director, sound person, light person, etc. So, having my filming set-up already figured out for acting really helped me when I first started making videos. And continuing to create my own content also lends itself to auditioning because there’s a lot of improv that goes into my videos — acting and creating really go hand in hand. I also write out some of the skits I do, as well.

Before the interview wrapped, we asked Pregoni if there was a message he hoped people gleaned from the content he creates. “Follow your dreams,” the actor/creator replied. “It may be cliche, but it’s true. You just have to really stick with it and live it out.” Those interested in learning more about Pregoni and his work can also find him on Instagram and IMDb.