James Tang is not just “your internet boyfriend.” He’s also an actor whose series work includes titles like Brooklyn Nine-Nine, NCIS: Los Angeles, and Bosch. But it’s Tang’s role as a creator that led to his popular, afore-mentioned character, who appears in videos labeled as “emotional thirst traps.” The influencer known as @jamesthetang on Twitter, Instagram and TikTok recently hit 100,000 followers on the latter. He virtually sat down with Casting Networks to share how he got to that milestone mark, along with the purpose behind his videos.

It’s good to virtually see you, James.  Can you share the “origin story” of how you started creating your own content that led to your current status as an influencer?

I started creating videos for TikTok at the start of the pandemic when I was staying with some family and basically stuck indoors. The platform was quickly becoming popular, and some of my friends on the app started blowing up so I wanted to jump on it, too. I made the resolution to start posting once every day for a month, and my followers grew to about 4,500. Meanwhile, someone else I knew that started at the same time with similar numbers got up to 300,000 followers within that time period. I realized something I was doing wasn’t working and was burnt out on the app so I got on Twitch to try a different medium of content creation.

I saw that platform on your Linktree, too.

Twitch was something I felt more in line with at the time because I already loved gaming, and I learned how to interact with viewers via the live chat over time. I eventually hit a plateau on that platform, though. Meaning, the amount of energy I’d put into it didn’t equate to what I was getting back from it in revenue or emotional satisfaction. I ended up taking a course with Stream Coach Academy, which is meant to help people improve their streams. The program also takes a look at your content as a whole, though, which helped me realize TikTok was the best platform for me in terms of growth. So, I started posting videos there again and focused more on what content I thought would work for my ideal audience member. The course encouraged me to identify what type of person that is, and I was able to pull in what I’d learned from branding classes for acting, as well.

It sounds like you were able to take a very strategic, business-minded approach to creating your own content in the digital space as an actor.

I like to put a lot of effort into ending up in a place where I don’t have to put in any effort. [Laughs] To do a POV video, for example, you basically just use the same set-up as you would for a self-tape. So, I’ve already got that down. I’ll imagine the situation, and because I’m Meisner-trained, I can just react to it. People often think that creating “your internet boyfriend” videos takes a lot of character work, but they’re essentially just me organically responding to whatever’s in the scene. The whole thing started because someone suggested as a joke that I should post more “thirst traps.” I thought about how those types of videos are so visual and generally lean toward the male gaze. It made me think about flipping the script and making “emotional thirst traps.” 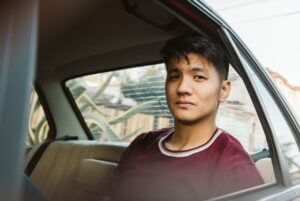 Those videos seem to be performing quite well with your audience.

They’re also very much in line with my acting brand, which is the wholesome guy next door, so it’s fascinating to see how it all works together. I hit the 10,000 followers mark on TikTok this summer, and that’s when I really felt myself shifting into quick growth. But then at around 45,000 followers, things started stalling out. That’s when I really leaned into “emotional thirst traps” with “your internet boyfriend” and also played around with some TikTok tricks — capitalizing on what’s trending and such. One particular video blew up this past December, and by the first week of January, I broke the 100,000 followers mark.

Congratulations! And I saw your Instagram post about the feedback you’ve received from people who say your videos have helped them set positive standards and even heal from past hurts. Can you share more about the purpose behind your work?

People often use social media to mock and bully others, to try and take one another down. I don’t subscribe to that and want to have the opposite effect with my videos. I’m trying to push some positivity into the world and encourage people with my videos, which do seem to be helping some folks. So that’s pretty cool to get feedback on and see happen. Plus, creating videos on social media also ties into my overarching purpose as an actor.

I want to be a part of increasing the scope of Asian male representation. I have this one face that I’m working with as an actor, but I also know that Asian men have often been shown as emasculated and desexualized in Western media. So, putting out “your internet boyfriend” videos are a way to show myself in a role that promotes positive masculinity. You know? I think it’s good to show examples of what that can look like as the counterpart to calling out toxic masculinity. And it is interesting to see how people respond to it. I’ve been getting a lot more direct messages and have even had followers “shoot their shot” in the comments section. [Laughs] It’s fun to read but also reflects that overarching goal of all my work, to expand Asian male representation.

Those interested in learning more about the actor/creator can check out his official site. The homepage features a succinct description of Tang’s brand as a performer, which of course extends to his role as “your internet boyfriend.” He’s described there as “the guy you take home to meet your parents, and it goes extremely well.”