Get to Know the Casting Director: Toni Higginbotham

Renowned casting director Toni Higginbotham has been a mainstay of casting in Australia for over 25 years, launching the careers of stars like Cate Blanchett and Simon Baker and working for several networks before striking out on her own. Casting everything from commercials to television and feature films, Higginbotham, with her encyclopedic knowledge of the entertainment industry, is very much in demand, but she agreed to give us a few minutes of her busy schedule to talk about her career, her insights into casting, and her workshop series that helps actors break into the industry.

It’s really great to meet you. To start, when did you realize that casting was the job for you?

I started my career when I was 17. I was fortunate enough to start as a receptionist on the highest-rated drama series in Australia, called A Country Practice. There are huge names now [who] actually started on this show. So I started as receptionist for about eight months, and the likes of Nicole Kidman [would be] in the foyer waiting for an audition. Then I moved up quite quickly into production as a production assistant after eight months. I went to film school in the nighttime, and I became a production coordinator on this drama series. [I] stayed there for about five years and got all my skills in television, drama, and production.

Then I was poached by some producers when I was about 24. I went on to another series called E Street and I worked on that for nearly four years. I was in production, plus I was doing casting, and I went to them and said, “I’m too busy casting, so can I open the casting department?” And so I opened the casting department. I was the youngest casting director in the country. I think I was around about 25.

If you weren’t in casting, what do you think you would want to do?

Well, that’s a really good question. No one’s ever asked me that. I suppose what I felt when I became a casting director is that I always wanted to do something creative, and [that] fulfilled me as a person. I never thought I was a creative person until I started doing casting. I really like having a business. I’ve never thought [about] what else I’d do. I think I’m the luckiest person in the world, but I’m a casting director.

I think that is a great answer. How does your approach to casting change for different types of projects?

They change a lot. With a film, I can tap in on some of the biggest actors in the country. With commercials, a lot of it [crosses] over into models, real people, and actors. It depends on the script. Generally, within film, a lot of it will be offered, so there will be only a certain amount of people that you’ll be putting up to the director. Where [for] commercials, I put up about 15 people.

The other thing is, I’ve got a team that works for me, and unless it’s a role where it’s a no-brainer, I always pick who goes into the casting. Every client is treated with that respect. I just cast a job out of New York where we had to find scientists for IBM, this massive [group of] computer researcher type persons. That’s when my team will help get those sorts of real people into those sorts of roles.

That’s really interesting. If somebody made a film about your life story, who would you cast to play the role of Toni Higginbotham?

I’d really love Cate Blanchett. It would have to be someone that doesn’t play themselves but [who] is a chameleon like her that can play any role possible.

Nice. You mentioned that you’re going to be casting a film in the U.S. fairly soon.

He’s a young director. He’s Australian, but he spent a lot of time in L.A. and New York and the producers are both Australian and American. I started casting mid-2022 and they just did a rewrite on the script. The script’s now finalized. It will be shot in New South Wales, but the female lead could come out of L.A. A lot of Australians head to L.A. because that’s where the big opportunities are. So if any of the cast are in L.A., then we’ll bring them back to Australia.

Can you go into a little more detail about your workshop series?

The next workshop is actually meeting me in the studio. We will give everybody a script, [and] we’ll take them through the process of an audition. I have one of the best drama coaches, so she’ll assist me and we’ll give feedback on how we felt their audition went; how we’ll go through the scripts. I’ll also explain to them about my process of how I cast, that my clients are all producers and directors, and that once I get a brief, I put it on Casting Networks. That’s my platform. I don’t use any other platform.

I’ll go through the best way to do a self-tape and we’ll talk about agents. I talk about acting as if they’re at a gym, and the more that you go to the gym, the fitter you get. The more opportunities you get to train and to work in the industry, the better. I go through with actors that the more you put into life, the more you’re going to get out of it. So going to workshops like this and meeting people like me, if you want to be in this industry, the old saying, “knowledge is power.”

They can email us. We’ve got an email address (admin@tonihcasting.com.au) and we’ve made it very boutique. We are only going to do one big director a month, and do one big workshop with me once a month.

Thank you again so much for taking the time to chat with us today. Before we go, what do you do to relax and recharge when you’re off the clock?

I have a running club and I get up on a Saturday morning at 4:00 AM. I meet the running club at twenty to five. It’s called 440. And we run along the beach. I run for about 40 or 45 minutes with about 300 people. And then we dive into an ocean pool, and then we go [for] coffee. I try and work out at least five times out of seven a week.

So that for me is my relaxation. That’s my addiction. I used to have wine after work, but now it’s time to keep young, keep focused. That’s what makes me feel good. And my beautiful children and my partner, my family.

Upgrade to Premium at Casting Networks now to submit yourself to the roles that casting directors like Toni Higginbotham are filling today! 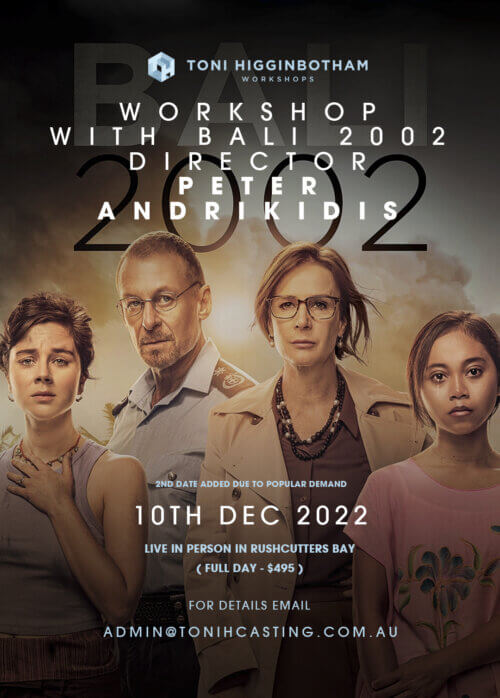 For more information on Toni’s workshops for actors, visit ToniHCasting.com.au.