Get to Know the Casting Director: Jason Harris

We featured last year someone who specializes in automated dialogue replacement (ADR) voice casting and thought it was about time for another look into the fascinating world. The practice involves selecting the right voice actors for what is commonly referred to as “loop groups.” For those unfamiliar with such groups, their purpose is to essentially fill in the dialogue and sounds of background artists in a project. In other words, since only principal actors are mic’d when a scene is being filmed, voice actors in loop groups lend their voices to the other people you see in each scene. Jason Harris is an ADR voice casting director with a long list of impressive titles on his résumé that range from Showtime’s Yellowjackets to Peacock’s Bel-Air to specific voice casting for Denis Villeneuve’s Dune. The New York native sat down with Casting Networks via Zoom to share a window into the person — as well as the work — behind all the credits in his niche area of the industry.

It’s nice to virtually meet you, Jason, and before we go any further, I have to ask you about the bears. I always do a little pre-interview research, which includes people’s socials, and I saw on Instagram that you recently spotted a bear wandering around your property.

We’re currently renovating a home in Monrovia — it’s been six months and is starting to feel like we’re just paying for something that you get to go visit and look at once in a while. [Laughs] I don’t recommend it to anyone. They have some brown bears over there, and I’ve found them to be very chill. I’m not going to run over to one and take a selfie, though, even if I have been tempted.

You got a video of someone on the property who ended up sitting right next to two bears, though, and did snap a picture, cool as ice!

His first reaction when the bear walked toward him was essentially, “Oh, sh-t!” But then he kind of just figured he was already there so he might as well capture it and took out his phone. I mean, it was too late to run at that point, and you’re not really supposed to run from bears, anyways. Plus, this was a mother and her cub.

Wow. That was a high-stakes situation, and I’m glad it had a happy ending. Thanks for sharing such a fascinating anecdote — this is a true get-to-know-you piece! Switching gears here, what can you tell us about the world of ADR voice casting and how you developed a niche in that area of the business?

The job of ADR voice casting, itself, is a strange gig. We’re putting together a group of voice actors — who are collectively called a loop group — that improvise the background dialogue of a scene while bearing in mind any locations, time periods, vocations, and style of the principal action of the show. I work primarily in TV, and after screening the episode I’m working on, I form the group of people needed for it. Then I also direct the session and join in on voicing it. So, it’s this strange little world in which you’re coordinating a lot of different things outside of casting. I started in the industry as an actor and even hosted a game show on Nickelodeon called Double Dare 2000 years ago. I did a lot of voiceover work, which included animation, commercials, audiobooks, and ADR. And that led to getting offered some shows to both work on and cast for ADR. Having already been a part of that community, I knew a lot of voice actors, which allowed me to bring in the right people for projects. It eventually grew to where I started my own company in LA — we’re still bi-coastal with New York — called The Looping Division.

It’s always fun to hear how someone ended up in their career. But let’s consider an alternate universe in which you had to choose a different job. What would it be?

I’m sure I’d be the starting goalie for the New York Rangers — I would be the oldest person to hold the position. I played very briefly in college but was terrible. In this alternate universe, though, I would be great. Igor Shesterkin would never have gotten the job if I were in the mix. [Laughs].

So you’re a soccer fan?

Oh, the New York Rangers is actually a hockey team. But that’s fair — hockey is just soccer on ice. Instead of kicking something, though, you just slap it with a stick. It’s basically the same thing!

[Laughs] I’ll just go ahead and note for our readers the personality trait that was revealed from my question — you’re very kind when people who don’t know sports try to talk about them! Now, let’s talk about one of your recent projects. What can you tell us about doing the ADR voice casting for Fox’s upcoming, Susan Sarandon-led series Monarch?

We’re working on it now, and since the series mostly takes place in Texas, there have to be little hints of the accent within our group. It’s a network show, though, so the dialect has to be really light. Monarch centers on country music, and a lot of the loop group work for it involves crowds. That can include people cheering and reacting at a concert or yelling at a big premiere. There’s not a lot of particular jargon the actors need to know, so it doesn’t require as much research as other shows. But it does involve a lot of physical work, like when fans are just screaming and going crazy for 12 minutes straight. And then as the voice actor, you do that over and over again.

It sounds like it would be tiring, as well as maybe a little cathartic. Before we wrap, I’d love to hear what you do for fun when you’re off the clock.

Well, I love to travel. I’ve been to Tokyo and Paris and just all over — I’ll go anywhere. I also love food and experiencing new restaurants and different types of cuisines. I always try and get the most out of my “cheat days”! And as a sports fan, I enjoy going to away games. I love baseball and hockey, so as a true New Yorker, that means my teams are the Mets and the Rangers. I also have to show off my little friend over here — this is Bowie [pans camera to reveal an orange cat]. She follows me from room to room, and I’ll play fetch with her in my downtime. Maybe she’s a sports fan, too! [Laughs] It’s just bizarre to me, though — this cat must be possessed by a dog. 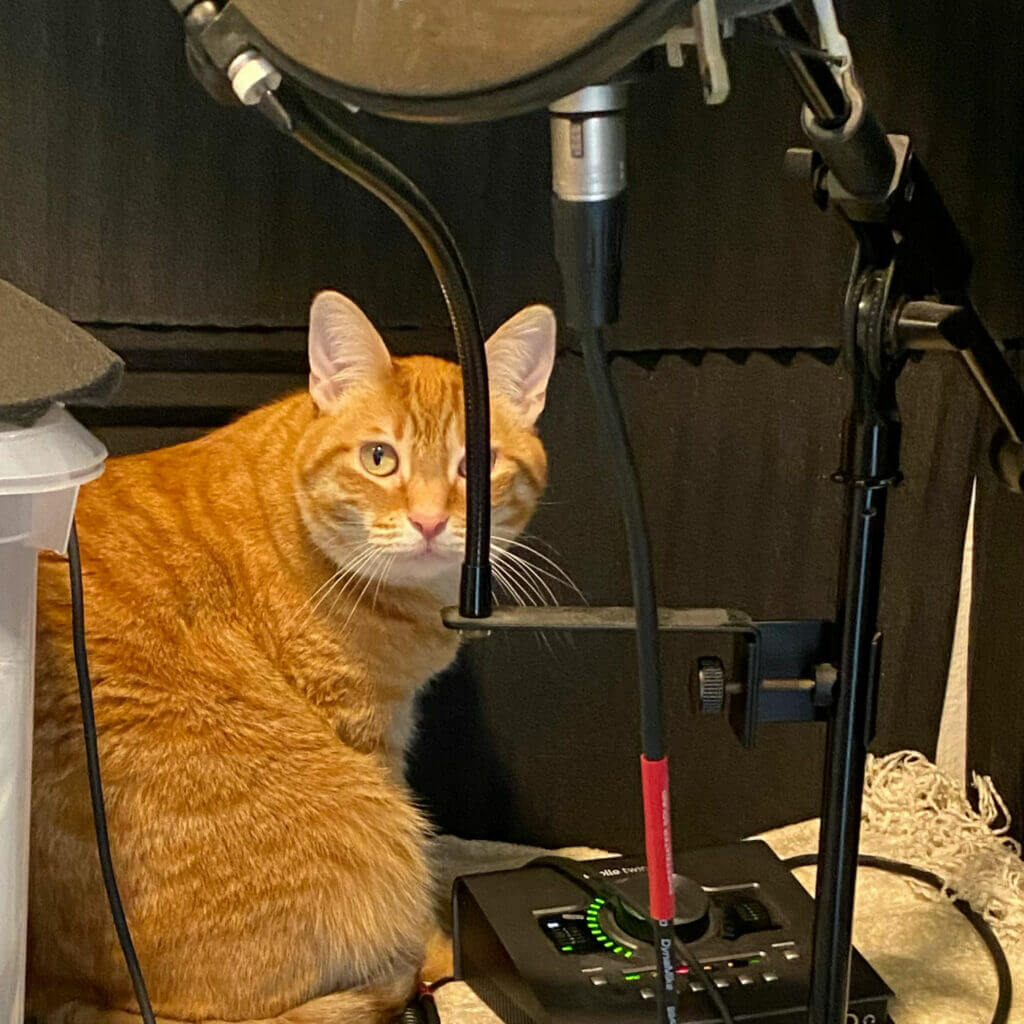 For those interested in exploring loop group work, Harris shared that having an ability with different languages is a great way to get your foot in the door. A familiarity with professional jargon — such as medical or legal — is also advantageous, and being able to improvise is another key skill. Harris also recommends actors set up their own voiceover booths at home since the majority of loop group sessions are still being done remotely. “If you already have a quiet walk-in closet, it would only be $600 or so to get all the needed equipment for your booth,” he estimates. “And doing just one loop group session would cover that.” Those interested in additional information about the casting director and his work can find it on The Looping Division website.