As productions begin figuring out what restarting looks like, one area of the industry has been able to keep going, even in the midst of COVID-19. Voiceover (VO) projects continue to move forward thanks to the nature of how they’re produced, which allows for talent to capture audio remotely. During this time, many actors who’ve previously stuck to on-camera work have begun exploring the world of voiceover. But it’s one that comes with its own set of rules, and on-camera actors wanting to make the transition need to do their homework before jumping in. We’ve previously given you some tips on how to get started, and now we’re adding some advice straight from a working voice actor. Reba Buhr has a number of voice acting credits under her name that include Final Fantasy VII Remake, Next Gen, The Elder Scrolls Online, and Sword Art Online Alternative: Gun Gale Online. Since Buhr is also no stranger to on-camera work, she was able to speak from her varied acting experience to share with us advice for screen actors interested in getting behind the microphone.

What’s been your experience with VO work since the pandemic started?

I have been able to continue working this whole time since quarantine started. There was a small drop-off at the beginning when studios needed some time to figure out how to work remotely. Within a couple of weeks, I was back at work in some capacity, though. And now I’m just as busy as ever, but with the caveat that I’m working exclusively from home. Besides being a voice actor, I’m also an audiobook narrator, which means I already had a solid home studio set-up going into this. Before COVID-19 hit, not every voice actor would’ve needed the full, at-home kit and caboodle because they would’ve been recording in-studio a lot of the VO projects they booked. I do think that the VO world is going to change as a result of this pandemic, though. While we will eventually get back into studios, I think there will be more recording done from home now that we’ve discovered how many projects we can do remotely. But it’s important to note that on-camera actors should start by learning more about VO work before investing a lot of money in a home studio.

That makes sense. Where is a good place to start for someone wanting to dive into the world of voice acting?

Well, the first thing I would say is that an on-camera actor already has a great foot forward for themself. They’re already well-positioned to start doing VO work because they’re a trained actor. It doesn’t matter if you’re voicing an animation project or a commercial or a promo — you need to be able to interpret the copy and to bring life to it. Just because it’s a commercial doesn’t mean you’re not acting in it. So on-camera actors already have the foundation for what they need to be great. And then they need to learn the technical skills related to working with a mic, as well as the computer software needed to capture sound. Plus, there’s a learning curve with that specific type of copy. An animation script is similar to an on-camera TV or film script, but the rules are a little bit different. While you can use your body to help bring things to life on camera, you have to exclusively rely on your voice to do that in VO. Actors with a background in theater already have a great set of tools for stretching and being broad in the way that animation really requires. But as far as a starting place for all on-camera actors, it’s imperative that they take classes in which they can learn the rules that come with VO work. 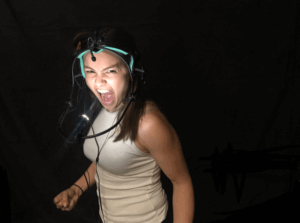 Are there any types of classes you’d recommend?

If someone’s just starting out, I suggest they take a class in which they get to sample the smorgasbord of all the different areas of VO. That includes commercials, animation, video games, promos, audiobooks, radio imaging, narration, etc. People often specialize in one of those areas, so it’s good to start off by trying all of them. You never know what you’re going to be best at until you try it. I think it’s also important to note that just like in the on-camera world, some classes offer things that they can’t actually deliver. A good example is a course series that promises you a career at the end of it in which you’ll be a professional voice actor making a certain amount of money. That means that it’s probably not the most legitimate course and the people behind it may be trying to capitalize on newbies who want to get into the industry quickly. They’re offering an automatic career, which they can’t ensure, and that type of class isn’t one that a working professional would take, so you wouldn’t be making any useful professional connections in it either. The same goes for if they want you to commit to a number of classes that then conclude with you also paying them to produce your demo reel. Anybody who really understands the business knows that the right time for someone to make their demo reel won’t be the right time for everyone. And they’re very expensive, so there needs to be a lot of thought put into making one.

Speaking of which, any advice on voice demo reels?

I would say that at least 50 percent of people start with a commercial reel and then move on to a different type of reel. Like I said, though, don’t do it until you’re ready. My first reel was a commercial reel, but I made it a little too early. It cost me about $1,000, and it wasn’t good. It wasn’t the demo producer’s fault — I just wasn’t good yet. You want to wait to invest in a fully-produced, professional reel until you’re at a place with your skills where you won’t be embarrassed to listen back to it later on. I have an animation reel that I’ve been able to use for the past seven years because I waited until I’d gotten really confident with my work to make it. I get that it can be a catch-22, though, because you often need a reel to be considered for projects. So the idea is to not make one until you’re ready, but you might want to get ready pretty quickly. And if you have the skills, you can also consider producing your own “starter reel” in the meantime to use for castings that are open to considering beginners.

It sounds like the final thing that new voice actors need to do, especially right now, is to create their own home studios. What should they consider with that undertaking?

The big thing for a newbie to know is the difference between a USB microphone, which is a mic that plugs directly into your computer, and an analog mic, which requires an interface. The latter is more of an investment, but it’s going to sound more like something you could actually use to do professional work. If you just want to practice and have one for taking a class, the USB mic is a good place to start, though. The most important thing for sound quality, though, is actually the space in which you’re recording. At this point in my career, I have a vocal booth in my apartment. It was a big investment, and I really waited to build up to it. Before getting it, I worked out of my closet, which is common because clothes are good for buffering sound. I also put foam on the walls for additional buffering, and it created a set-up that was good enough for doing a lot of professional work. So the big idea there is that you need to create a really sound-deadened space for your home studio. And the last big aspect of recording at home is the audio program you use to capture. You can start with GarageBand or something that’s built into your computer, but the capabilities there are limited so you’ll eventually want to upgrade. A lot of people start with something like Audacity because it’s free, and then you can work your way up to programs that are more of an investment, such as Adobe Audition, Logic Pro, or Pro Tools. And there are a lot of YouTube tutorials and other online resources that can teach you the various programs, because they definitely come with a learning curve.

Buhr shared during the interview that her advice could provide a jumping-off point for those interested in doing VO work, but they should also conduct additional research if serious about pursuing a VO career. She recommended checking out iwanttobeavoiceactor.com, created by veteran voice actor Dee Bradley Baker. And she left us with one final tip. “VO work is about building genuine relationships,” Buhr noted. “Do all of the hard work in the beginning, and then just be a genuinely good person who puts in the effort to grow and get better. That’s how you build a career in this field.” So if you’re interested in jumping into the area of the industry that is still thriving in the midst of the pandemic, you can take Buhr’s words to heart and start your journey into the world of voiceover.