Welcome to ACTING UP, the place where we celebrate standout performances in TV, streaming and film. Other than spotlighting exceptional work from recent projects, this feature also shines a light on how certain actors got where they are today. Have a peek and then check out these notable performances to help hone your craft.

Adrienne Warren plays Mamie Till-Mobley, a crushed mother-turned-civil-rights-activist who stands up to the Jim Crow South after her son gets lynched in Women of the Movement.

(The six-episode limited series will be shown in three parts, premiering on January 6th on ABC. Episodes stream the next day on Hulu.)

For all the period-piece stories TV chooses to tell, there’s usually one that feels particularly timely while proving the old adage: the more things change, the more they stay the same.

That’s just one emotion you feel while watching the first two eps of ABC’s Women of the Movement, a new limited series created by Marissa Jo Cerar. The story shines a light on the tragic and true story of Mamie Till-Mobley (Adrienne Warren), the woman who lit a spark for the upcoming Civil Rights movement after her 14-year-old son Emmett gets lynched by white supremacists in Mississippi 1955 – after miraculously surviving a bout of polio as a child.

Mamie is the centerpiece of this story of courage, which starts with the hardships she endured to give birth to Emmett (Cedric Joe) before raising him as a joyful young man on Chicago’s South Side. After a fateful decision to let him visit their great-uncle Mose (Glynn Turman) in Mississippi for a short “vacation,” Emmett’s trip to the Deep South tragically leads to his gruesome murder after he allegedly flirts with a married white woman working at a small grocery store. In doing so, he unknowingly defied the unwritten rules of the Jim Crow South. 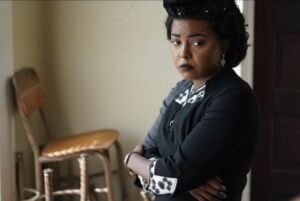 The reaction is unconscionable and leads to his abduction, mutilation, eventual murder and a cover-up. The series deals with all of it – including the shocking trial that takes place after it.

As the series reminds us of this appalling chapter in our country’s history, Till’s lynching at the hands of the woman’s husband and half-brother echoes a definitive “how could this happen?” Yet, as we follow Mamie on her very public journey to expose ugly truths in society, it’s hard not to be reminded of the list of more recent tragic deaths like Breonna Taylor, Ahmaud Arbery, Trayvon Martin and George Floyd (amongst others), who’ve befallen a similar fate.

Throughout it all, Warren’s portrayal of Mamie Till-Mobley is a powerful history lesson and the actress does a brilliant job honoring a woman who changed thinking around what was possible. 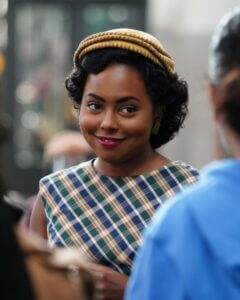 To portray Mamie’s story accurately, Warren studied all the material she could find about this smart and resolute trailblazer who decides to take her son’s disappearance public with the help of the NAACP. Then, once her worst fears are realized, her brave decision to bring her child’s brutalized body back to Chicago for an open-casket funeral so people could see the horrors firsthand.

Thanks to Warren and the work of her surrounding cast, we get a powerful revisiting of an important story that lets us witness legendary intestinal fortitude firsthand. Also – a reminder of the fight that remains for African Americans and those around them hoping to affect change.

Nobody puts it better than Mamie, who speaks the following truths to her church congregation:

“Whatever happens to any of us anywhere in the world had better be the business of all of us.”

Thanks to Women of the Movement, it is once again. 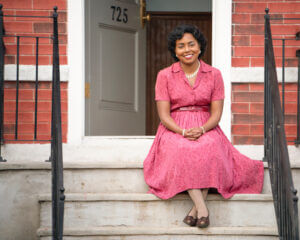 As a talented multi-hyphenate, the 34-year-old Warren is a triple-threat when it comes to singing, dancing and acting.

In a career that launched with her Broadway debut in Bring It On (2012), the Virginia-born Warren continued to develop her craft, eventually playing the role of Gertrude Sanders/Florence Mills in Shuffle Along (2016). For that, she received a Tony Award nomination in a year where Hamilton won almost everything. But that’s probably not the role that has left the most memorable impression of Warren on audiences. For that, the winner would have to be her run in the title role of Tina Turner in the West End production of Tina – The Tina Turner Musical (2020). For that, she won the Tony in the same category she had been previously nominated for: Best Performance by a Featured Actress in a Musical.

That’s not to say that Warren hasn’t made the occasional appearance on TV. In between stage gigs, she’s had roles in everything from Blue Bloods (2013) to Orange Is the New Black (2013).

But there’s no doubt that her face will be remembered for some time for her heartwrenching portrayal of Mamie Till-Mobley in Women of the Movement. To play this exceptional woman who would be 100 years old this year, Warren says she was drawn to the role in part because “We always talk about how strong women are, but we never talk about how we got our capes.”

As for what’s next for Warren, she’ll appear in the film Rustin, the real-life story of gay civil rights activist Bayard Rustin, who organized the 1963 March on Washington. Warren will also star in Gina Prince-Blythwood’s next film The Woman King alongside Viola Davis and John Boyega. The film is a historical epic about “true events that happened in The Kingdom of Dahomey, one of the most powerful states in Africa in the 18th and 19th centuries,” says IMDB.