Many of those in the industry wonder what life is like in a different role. Perhaps you’re a costumer who’s curious about the role of an editor. Or maybe you’re a stunt double interested in learning what it takes to be a stand-up comic. But should you find yourself wondering what it’s like to be a working TV and film actor, this installment of our A Day in the Life series is for you. Amanda Jaros, known for her work on Bluff City Law and NCIS, sat down with Casting Networks to talk about preparing for roles, being on set, and life in between.

If you’re preparing for a role, how do you spend your day?

Whether I’m preparing for an audition or for a role I’ve booked, I’ll do script analysis. I like to identify what’s happening before the scene, the arc of the scene, and what my character will be experiencing after the scene. That way, I have a thorough understanding of how my character will feel about her circumstances, relationships, etc. From there, I’ll go line by line and memorize all of the dialogue, which includes mine and the other characters’. I use the space in the margins of my script to jot down thoughts my character is processing during the scene, and I like to actually think those thoughts when I’m delivering my lines. If I’m prepping a big audition, I’ll rehearse the scene with friends of mine or I’ll schedule a coaching session. Once I book a role, I review what I’ve already prepared in order to get into the same headspace I had during my audition. It’s rare I’ll have a coach on set. So far, that’s only happened when I was speaking another language. 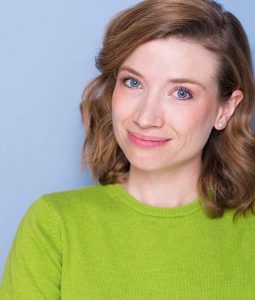 What does an average day look like for you when you’re on set?

I like to arrive to set 15 minutes early. The first thing I do is check in with the AD [assistant director] who’s running the base camp. They show me to my trailer or to the breakfast truck. After I indulge in what’s most likely a breakfast burrito, I make my way back to my trailer to review the contracts. Once the paperwork is signed, I wait for wardrobe to drop off my costume if it’s not already there. Then I’m called to hair and makeup, where I review any changes to the script or just relax and have fun becoming friends with the artists in there. When I’m finished, I head back to my trailer and change into my wardrobe. If I have extensive spare time, I read or have a time of reflection. I am trying to be better about not being addicted to my phone, so the other alternatives have been more fulfilling for me.

I’ve worked with some wonderful PAs [production assistants]. Some people seem to have this false idea that PAs are supposed to do whatever the actors want, but I think it’s important to see how we — as actors — can make their jobs easier. If I want to walk around or go grab a snack from craft services, I always make sure I tell a PA so the crew can keep track of where I am. I love being on set. Each director I’ve worked with has a different style; it’s so cool to see their vision for the story they’re telling. I admire directors who have learned the finesse of communicating well with actors and who know an actor’s process. Together, we set up the scene — there’s normally some sort of rehearsal before the cameras roll. Once blocking gets figured out, we film. When the day is complete and I’m wrapped, I’ll often decompress by writing thank you notes. I want people to know that I’m grateful for the job and for the opportunity. Plus, I appreciate being treated well on set. I’ve never had an experience with crew treating me poorly. I think that comes from a mutual understanding that we’re all there to co-create a project and are committed to truthful storytelling. 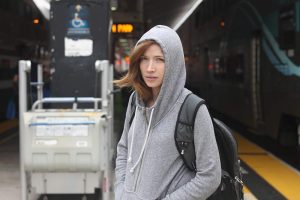 What do you do for your career on a daily basis when you’re not filming or preparing for a role?

I write. From my experience, it’s important for actors to create our own content. You can’t always rely on someone else to hire you or tell the story that you want to be a part of. But we live in a day and age where actors have the ability to create opportunities for themselves by crafting those stories. There’s also a marketing aspect to any career, including acting. For example, I’ll send postcards to casting directors when I book a job, just so that they’re informed. From time to time, I will also make career-related posts on social media. But those posts are something I’ve had to wrestle with in my spiritual life because I don’t want to post from a place of pride. I just want to inform my amazing support system of friends, family, and fans of what I’m doing next. I’d hate for any of my posts to make others feel miserable because I like to uplift others, including actors! Thanks to streaming services, there is an infinite amount of material that can be made and plenty of roles for everyone. So, I love celebrating the success of others! We’re all in life together; let’s support each other. Aside from work, I think it’s important to be well-balanced. In between work, I volunteer with a number of organizations, take classes, and spend time building relationships with people.

Besides a long list of acting credits under her name, Jaros also has some impressive writing ones. She’s written for Cartoon Network’s The Tom and Jerry Show, as well as for Funny or Die’s Skinny Legs Sketch Show, a project in which she also starred. Besides writing and creating one’s own content, Jaros also stressed in her interview the importance of being a lifelong learner. “If someone thinks they’ve reached the height of their knowledge in one subject, there’s still more to learn,” Jaros shared. “Either a perception of their glass ceiling needs to be broken, or there are more subjects to learn. I’m humbled by the fact that there’s always more to learn. There’s always more for all of us to learn.” Those hoping to one day live the life of a working TV and film actor would be wise to take Jaros’ humble words to heart.