When you’re an actor, it’s easy to get seduced by the idea of being in the next splashy streaming series or Marvel film. And that’s fine – it’s good to have goals and know what you want from your acting career. But these days, there are a slew of other reputable gigs working actors should be aware of – that can provide a decent pay day, solid reel material and, well, gratification too.

To say the world of podcasts is exploding is a massive understatement. With something like two million-plus podcasts spanning the globe depending on where you listen, they’ve fast become radio 2.0. Whatever your jam, there’s a genre for you. The range includes the mega-popular, Peabody Award-winning, true investigative journalism story Serial, which served as a gateway podcast for many back in 2014 – to SmartLess, the comedic celeb-driven interview podcast from Jason Bateman, Will Arnett and Sean Hayes that sold to Amazon last year for up to $80M.

Then there are millions in between.

I recently sat down with Branden Morgan, a former actor and current podcast producer at Cavalry Audio (the podcast division of Cavalry Media). Morgan currently oversees close to 30 audio projects and has written and hosted several others including last year’s popular true-crime podcast series, A Devil Within, that was produced in conjunction with Wondery.

In our conversation, the tireless producer offered up insights into all aspects of creative podcast production, revealing many useful things about this world that young actors should know.

Here’s some of the best advice and tips that came out of our chat.

1. The more of yourself you put into your audition, the better

As with all acting auditions, you want to stand out in an audition. But how do you do it in a medium where nobody ever gets to see your face? To that end, Morgan recommends taking chances in your podcast audition. “Show that you’re willing to take big swings and willing to fail and look foolish. That’s something we can work with.” Even if it’s not exactly what they’re looking for, showing that you’re committed to the role can help your cause, says Morgan. “Interpret it in a way that’s going to surprise us. Those are the people that get cast most of the time.”

2. Sound quality plays an important part in your audition

When it comes to how you’re recording your auditions at home, you’ll want to have a baseline setup that allows for minimal interference or distraction for those listening to your read. “Hearing some of the subtleties in someone’s performance can get lost if you have a shitty sound set up,” reveals Morgan. “That’s why a cottage industry has sprung up that says we’ll do your home tapes for auditions – so you don’t have to do it on your iPhone.”

What if you want to invest in a set up? “If you have the ability, there are some really excellent, relatively low-cost microphones that plug into your iPhone,” says Morgan, as well as some apps you can get on your iPhone that “can clean up the audio.” Other self-record tips, according to Morgan? “Don’t be too close to the mic. Don’t breathe heavy into the mic. Don’t be smacking your lips or I’ll just stop listening. It’s not an ASMR audition.”

It may sound obvious, but audio is an entirely different medium from film. Without the benefit of video, the audible distinction between types of voices matters dearly in a scripted podcast. In fact, just imagine listening to a Guy Ritchie film and what that might sound like without a visual guide to help sort out all the Cockney accents. That’s a lot of work for the brain bone.

To that end, working with an experienced casting director like Ally Beans from Eisenberg/Beans Casting makes a difference, as Morgan once did on the scripted series Verdict. A knowledgeable casting director “creates more accessible audio so you don’t have to stop and say, ‘Wait, who’s talking now?’” To that end, Morgan favors “a blind audition process because it doesn’t at all matter what actors look like. It’s about their vocal quality… and do they understand audio.”

4. Be ready to play multiples roles

Considering the smaller budgets for podcasts, auditioning for one part can often lead to you ultimately reading several in the final product, unlike TV or film. “It’s financially advantageous for us to double, triple or quadruple up an actor and have them do all of the one-or-two-line roles,” confesses Morgan. “The function of that role is to support the story and be a bridge between scenes and what’s going on… Get the job, get paid, get it on your resume. Don’t try to do too much with it.”

5. The direction you’ll receive on a podcast is different

If you land a podcast gig, know that the direction you’ll receive from the director will be different from more traditional media. “It’s very different at times, but in a lot of ways similar when it comes to technical stuff,” according to Morgan. “With a traditional movie or TV show, it’s hit your mark, know where your light is, don’t look at the camera, what’s my eyeline… With audio, it’s listen to the engineer. You’re too close to the mic. You’re too far away. Be consistent with your volume… You’ve got to listen to the engineer as much as the director.”

On the first show Morgan worked on, in fact, everybody had scripts. He’ll never do that again. “We went out and invested in 30 iPads, so you don’t hear the pages turning and ruin a scene.”

6. Don’t expect your line readings to be linear

As an actor, you should be prepared to go in and read all the parts you have – and know they may be “entirely out of order.” It falls on the director to make the most of the production days budgeted, which could lead to you being in nine episodes, but all your reading takes place in one day. It’s a reality of the business so producers can get the most out of their budget.

There can be benefits to the actor in doing it this way as well. You might be able to read a line three or four times if there’s time, and if you nail it, there might be a couple of takes that are just improv. According to Morgan, whose worked with podcast directors like Kc Wayland, the final audio version can be “a hybridization of word-for-word on the page with some really interesting moments [the director] is able to find in the improv.”

Being off camera can take the sting off the nerves, but don’t let the idea of potentially being heard by thousands, if not millions, stiffen you up to the point of inauthenticity. Morgan cites Howard Stern and Joe Rogan’s admonitions as cautionary tales. “Rogan says, ‘I forget that millions of people are listening – I’m talking to one guy’ while Stern says, ‘I just imagine that I’m talking to my best friend.’” That keeps things loose, accessible and leads to a more engaging product ultimately. “Podcasting is such an intimate form of consuming content. You’re actually going into someone’s head,” says Morgan. “That relationship really needs to be respected.”

Whereas budgets are expanding, it’s safe to say that nobody is entering the podcast space to make private jet money. Depending on the company, you can often expect to encounter SAG ultra-low-budget rates – with narrative stuff often not falling under SAG. The upside is that non-union actors can also work on podcasts (at non-union rates) because audio dramas aren’t SAG.

But Morgan recommends keeping an eye on the big picture. “If you take a financial hit and spend a day or two making $400 or $500 for an audio piece, and it does well, you can have an audio reel just like an acting reel. And you can use that for other gigs that pay a helluva lot more.”

It’s a reality that could change as podcasts get more and more popular, but for now, think of it as good experience in a still emerging medium, not a money gig. “If you’re an actor in L.A., you understand low budget… Like I did a play once and I got paid in beer, and I’m not a drinker.”

Says Morgan: “There are always ways to parlay it into something else if you hustle.”

If you’re wondering what audio sets are like, you can ditch the idea of lavish affairs starring expansive catering, double bangers and set PA’s roaming around yelling “copy that” into radios.

The reality is something a little more casual, reveals Morgan. “It’s set life but at a recording studio. You can show up in your pajamas; you don’t have to shave; there’s no hair and makeup. You show up and five minutes later, you’re working.” As for vibe, “It’s a very, very low-key set life. There’s not a huge crew. There are no lighting people, grips, no electrical, no hair and makeup, no big trailers. It’s just the control room, the engineer, the director and the actors.” 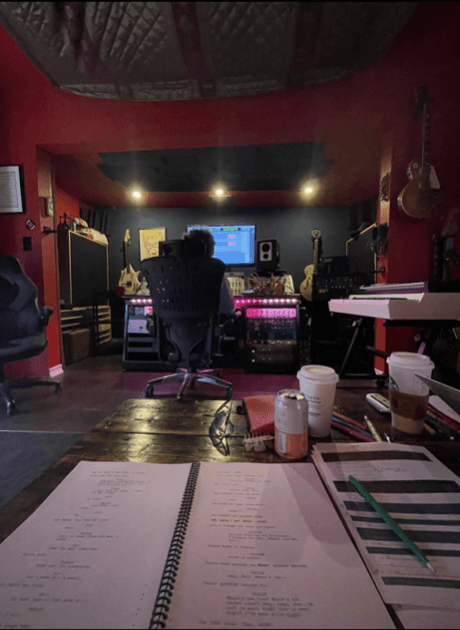 Sign up or login to Casting Networks and land your next acting role today!